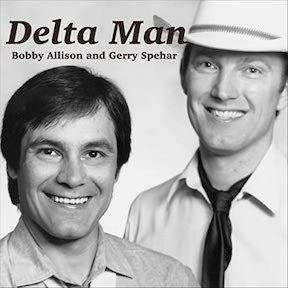 Singer-songwriters Bobby Allison and Gerry Spehar are two survivors of the "too much fun" '70s who somehow found some new life on "Delta Man," which comprises mostly tunes originally recorded in Nashville in the '90s and several new ones with the veteran band, I See Hawks in L.A. (ISHILA). The musicians who back the pair on this mostly rollicking country rocking outing iinclude some of the best from Music City - Pete Wasner, George Marinelli, Michael Rhodes and Rick Plant.

The album kicks off with one from those Nashville sessions – a barroom pickup song with the memorable chorus – "It's not a long way from the dance floor to/the dark of the parking lot/It's kinda like love, but it's not." "Bite the Bullet" carries a Waylon-like vibe, as they sing of ditching the party life, which has taken its share of tolls. "Baby's Got the Blues" is a crooning ballad, sung beautifully by Allison. Spehar is the lead vocalist on "Just Relax," a horn-infused throwback song, which with a gravellier vocal, might be mistaken as a Tom Waits tune. On the other hand, he delivers the nostalgic "River" with solid, traditional, country flair.

Spehar takes the shuffle "Money" with equal doses of swagger and wit. It's the first of three done with ISHILA, who also back on the title track, one of the most recent tunes as well as the stomper "25 Miles to Brady," all featuring Spehar on the vocal lead. Members of the Hawks also contribute to some of the disc's finest tunes – "Here in the Pass," which carries some of ISHILA's hallmark psychedelia; "Balmorhea," imbued by Punch Brothers' Gabe Witcher's haunting fiddle and the yearning, laconic "Eye of the Needle," the latter two featuring Allison's vocal lead.

"The Good Life" is classic weeping country with Farmer Pete on the pedal steel and Allison on lead vocal with Lisa McKenzie on charming harmony. Allison shows he's got that honky-tonk feel down on the radio friendly "Rockin' on a Country Dance Floor" and again on "Bubba Billy Boom Boom & Me."

Those two cliché-ridden tunes aside, the other tracks never suffer from "sameness" in this songwriting triumph that traverses several moods, ultimately leaving an upbeat feeling.