During a ceremony in Jackson, and emceed by Marty Stuart, Mississippi Gov. Haley Barbour and the Mississippi Arts Commission presented McAnally with the 2011 Governor's Award for Excellence in the Arts. A bronze cast statue designed by artist Bill Dunlap represents the distinction.

The next day, McAnally became the sixth artist to be recognized with a marker on the Mississippi Country Music Trail. The marker was unveiled at the same city park in Belmont, Miss. where McAnally once played as a child. He joins such music luminaries as Jimmie Rodgers and Marty Stuart.

"This is an amazing honor for me to be acknowledged in such a way by the state I grew up in and was inspired by," McAnally said. "Music is a vital part of life in Mississippi - from the Delta blues to country to Southern rock. It seeps into your very soul. I am proud to have grown up in a state so rich in culture and with such an amazing and deep musical heritage."

Music was a direct path for young Lyman "Mac" McAnally. Born in Red Bay, Ala. and raised in Belmont, he was a guitar and piano prodigy performing in clubs at 13, writing songs at 15 and a Muscle Shoals studio mainstay by 18. He scored his own record deal by the age of 17 and was later touring as a member of Jimmy Buffett's Coral Reefer Band, a position he holds to this day. As a songwriter, McAnally has scored numerous number 1 hits, including Kenny Chesney's 2009 Down The Road. 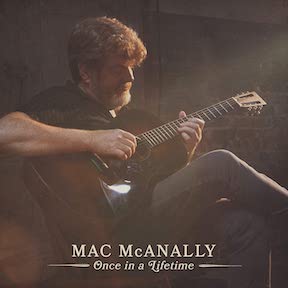