Monday, August 31, 2009 – Carrie Underwood released the cover of her third release, "Play On," today. The cover features Underwood sitting at a table with her chin resting on the palm of her hand. 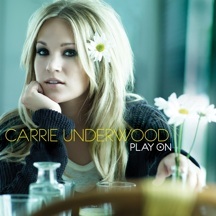 Due Nov. 3, "Play On" draws its title from the name of a song on the new album. Since the release of her debut album, "Some Hearts," in 2005, Underwood has amassed sales of more than 10 million albums with "Some Hearts" and 2007's "Carnival Ride." This year, she became the first country artist in history and the only American Idol winner ever to achieve 10 number 1 singles from their first 2 albums.

Underwood is currently continuing work on "Play On," once again teamed with producer Mark Bright, who helmed her "Carnival Ride" collection and seven tracks from "Some Hearts."

Carrie Underwood's gospel music album may not be traditional in the sense that she sings these songs the same way she heard them as a child growing up. However, on the traditional/modern country music spectrum, this album leans closer to traditional country music than just about anything Underwood's recorded. Underwood always sings well, no matter how her songs are arranged, but it's a true treat to hear that voice without much of the big production that usually accompanies it. ...
My Gift

It makes logical sense that Carrie Underwood, arguably mainstream country music's best pure vocalist, would make a Christmas album. And make no mistake about it, this is a 'Christmas' album, as opposed to a 'holiday' release. These 11 tracks are nearly all spiritual in nature. Therefore, you won't hear about Santa, reindeer or even toys under the tree. The only truly secular track is "Have Yourself A Merry Little Christmas," which is not – by a long ...
Cry Pretty

Carrie Underwood's life was reading straight from the storybooks: one of the few American Idol Winners with ongoing success; a professional athlete for a husband; a beautiful baby boy. The string of great fortune turned sharply in 2017, when Underwood began the unfathomable experience of three consecutive lost pregnancies. This was atop a frightening fall at her home that ended with her face in nearly 50 stitches. Sharing these moments with her fans makes the beamingly-beautiful singer ...