The album is a change of pace for the band because for the first time it, all four members - Gary Louris, Marc Perlman, Karen Grotberg and Tim O'Reagan - are on lead vocal and contribute songs. The album was recorded in late 2019 at Pachyderm and Flowers Studios in Minnesota. "This Forgotten Town" was just released as a single.

Bonus tracks (available on CD included with LP and separately)
13. Jewel of the Trimbelle (Grotberg)
14. Then You Walked Away (Louris)
15. Hypocrite's Lament (Perlman/Louris)

"XOXO" comes on the heels of The Jayhawks' two most recent releases, 2016's "Paging Mr. Proust" and 2018's "Back Roads and Abandoned Motels."

More news for The Jayhawks

CD reviews for The Jayhawks 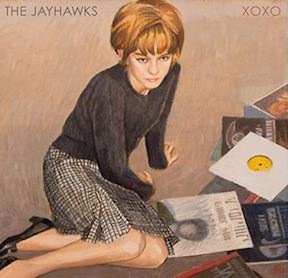 Attempting to assign a specific sound to The Jayhawks is a bit like trying to pin a paper tail on a live donkey. The Minneapolis outfit, fronted by co-founders Mark Olson and Gary Louris, began life in the '80s as a country rock band, but found its greatest critical success in the early '90s with the rootsy alternative rock folk of "Hollywood Town Hall" and "Tomorrow the Green Grass," which blended the band's natural rock leanings with its upper Midwest Bob Dylan heritage. ...
Back Roads And Abandoned Motels

The Jayhawks' "Back Roads and Abandoned Motels" is an album mostly made up of songs front man Gary Louris wrote or co-wrote for other projects, ranging from the Dixie Chicks to Jakob Dylan. For the most part, these songs just sound like great Jayhawks songs because that Louris vocal quiver is one of Americana music's most recognizable and heart-tugging sonic signatures. Therefore, it's momentarily off-putting when Karen Grotberg takes the lead on album-opener "Come ...
Paging Mr. Proust

The Minneapolis-based alt.-country/roots rock stalwart The Jayhawks is back at it again in the wake of the most recent split between founding members Gary Louris and Mark Olson. If longtime devotees had any reservations about the band's first studio album in nearly half a decade and the first without Olson since 2003, the sunny acoustic rock sound and trademark harmony vocals of "Quiet Corners & Empty Spaces," the lead track on "Paging Mr. Proust," should put them at ease. ...