Leave it to the people back home to keep you grounded .

Despite the international acclaim, beside the fact she can draw from the A-list of Nashville's top musicians for recording sessions at the drop of a hat, Cape Breton fiddler Natalie MacMaster isn't about to get above her raising. Family and friends in her native Nova Scotia won't allow it . 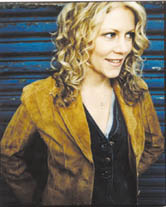 While Jennifer Lopez may have laid claim to the just-plain-folks phrase she's still Jenny from the block, the pop diva has nothing on MacMaster, who's truly just Natalie from Cape Breton Island .

MacMaster, 30, is steeped by the generations before her in Cape Breton's rich Scottish culture, carrying forward the region's traditional music and dance that dates back some 200 years .

Any notions of a swelled head after weeks of fans' adulation on the road or performing alongside the likes of Béla Fleck or Edgar Meyer in a studio for her latest album, "Blueprint," on Rounder, are quickly dispelled when MacMaster returns to Cape Breton Island's thriving music scene. Though she's a standout among Atlantic Canada's many great musicians and dancers, there's a no-nonsense reality about returning to her roots along Nova Scotia's rugged east coast .

"I was on the road about 150 days in 2003 and did about 100 shows," says MacMaster from her current home in Lakefield, Ontario, about 70 miles outside Toronto, which also happens to be the hometown of her husband, Donnell Leahy, a well-known Canadian fiddler in his own right .

Apparently the show count wasn't quite accurate - at least in MacMaster's mind. She quickly corrected herself .

"Actually, I did about 125 shows, including the square dances ."

So, in and among appearances with folklorist Garrison Keillor, guesting on "Late Night With Conan O'Brien," lengthy West Coast road trips and festivals like Telluride and Merlefest, MacMaster has the time and - perhaps more importantly - the inclination to get back to her childhood roots by playing square dances. Sort of like J.Lo onstage for a wedding at the Elks' Lodge in the Bronx .

"Nothing's changed," says MacMaster, who outside of playing a New Year's Eve show in Ottawa, was trying to lay low for the holidays. "It's just like 20 years ago. They'll just say, 'Hey, there's Natalie.' They don't treat me any differently because of my success. They're as excited about my dance as anyone's. I go home. Home is home. They're super-supportive and always have been. But they haven't changed, and hopefully, neither have I ."

Yet, MacMaster seems as closely tied to her native Cape Breton's transformation as anyone. Born roughly the same time as the making of a documentary titled "The Vanishing Cape Breton Fiddler," MacMaster's career seems to have mirrored the area's re-emergence as a musical and cultural hub .

MacMaster likes to credit the Cape Breton Fiddler's Association, which was created shortly after the documentary was screened in the early '70s, for nourishing her career in the 1990s. Growing up in a family at the heart of the region's musical and cultural history, MacMaster began playing the fiddle at age nine. Soon after she was playing traditional square dances and variety concerts .

As is the case with traditional Cape Breton music, MacMaster's playing is closely tied to dancing .

After becoming a proficient dancer, MacMaster learned the individual Cape Breton approach to the violin, which stands out for its bowing technique and repetitive structures known as "cuts" or triplets. MacMaster began playing beyond Nova Scotia's borders when she was 12, touring the festival circuit in Canada and the United States. She released her first record in 1989 at the age of 16. Two years later, she released "Road to the Isle," which garnered several music awards in Canada .

"Cape Breton is a real unique place because of the tradition," MacMaster says, touching on local history regarding the Highland clearances and the Scottish migration to Nova Scotia. "The fiddle tradition here is now considered more traditional than in Scotland. It's a bit more of an older style ."

It's also everywhere on the Cape, she added .

"There are more fiddlers per capita in Cape Breton than anywhere in the world," she says. "A lot of people take up the fiddle for environmental reasons. I got it both ways - environmental and family ."

And how. Chief among her fiddling and dancing bloodlines is her uncle, Buddy MacMaster, a local historian and fiddling legend whom MacMaster calls "Cape Breton's most famous fiddler ."

And at 77 years old, her Uncle Buddy is still performing. With tourism being the region's second-largest industry - the paper mill's tops, she says - there's plenty of exposure for local musicians .

"There are several others besides myself who are making careers out of music," she says. "Before my time, it was mostly men, but there are many more women playing now. I know about 60 to 70 women who play. There are a dozen or so in Cape Breton. Most of the rest play for fun ."

Like her uncle before her, Natalie MacMaster is among the leaders of Cape Breton's shifting musical landscape .

That may be among the most notable ironies in MacMaster's latest album, "Blueprint," which contains a number of bluegrass songs .

While the title may not intentionally refer to Cape Breton's musical future, it at times wanders a great distance from the traditional music that defines Nova Scotia's rocky, weathered coast. MacMaster spent much of the second half of 2003 on the road in support "Blueprint," recorded in the spring of 2002 in Nashville .

"We planned to record it in Canada, but 70 percent of the people on the album live in Nashville," she says of "Blueprint," which finally was released last September. "It was easier for me to go to them. I loved Nashville; I'd been there before, but never recorded there ."

Produced by Darol Anger, an innovative string virtuoso in his own right, the album is a "Who's Who" of A-list pickers - Béla Fleck, Sam Bush, Jerry Douglas, Viktor Krauss and Edgar Meyer among the most notable. Singer John Cowan even joins his ex-New Grass Revival mates Bush and Fleck on one song .

With such a wealth of talent and a diversity of styles, MacMaster nonetheless thinks the album very much retains her vision .

"It was nothing short of amazing," she says of the two weeks' worth of sessions. "I wanted it simple in production - it was traditional in that sense - but very worldly. I wanted to feature musicians making music in a new way ."

MacMaster had never played with any of her fellow musicians, nor had she ever recorded with a Dobro or banjo. She compiled the tunes, while Anger organized the sessions and suggested the treatments. Because MacMaster was between record deals, there was a lapse between recording the album's 12 tracks and the release of "Blueprint ."

The time in between allowed for plenty of post-production work, but it also allowed for something even more personal - her Oct. 5, 2002, marriage to Donnell Leahy, whose family band exploded onto the Celtic music scene in 1997 with the song "The Call to Dance." They went on to win several music awards, crack world music charts and tour with Shania Twain .

"Luckily he proposed May 3rd, and we finished up the album a couple weeks later," she says .

Despite the heavyweight lineup, as well as her pending nuptials, MacMaster was able to maintain her focus .

"I was excited, not nervous," she says. "I was used to playing with people, used to being in a recording environment, and I kept telling myself I had something to offer too. I had to gain confidence. I told myself that I play a tradition they never played before - Cape Breton fiddle music ."

When the sessions started, any veil of competition immediately lifted .

"Once I met those guys, all that went away," she says. "They were so generous with their compliments, and that's important when you record. They can all pick and choose whom they want to play with. I was blown away by their kindness. They made serious musical dreams come true for me. And the thing is, they are so darn good and they want to be better ."

Meyer recently agreed to perform with MacMaster in a video shoot for the song "Appropriate Dipstick" from the new record. Because it had been some time since the classical bassist had performed the piece, he felt the need to revisit it .

"He wanted to get it perfect," she says. "We were in makeup and wardrobe, and he's out there practicing. Most people wouldn't do that. Most people would say it's just a video, that you don't need to do it perfectly. It took such diligence and dedication to do that ."

She has similar "above and beyond" stories about banjo master Fleck, who took four hours out of a day on the road to record a part, and Douglas, the Dobro virtuoso who on a day off had to search out a studio to re-record a part for MacMaster's album .

"There are countless episodes of these guys doing this just for the sake of the music," she says .

While "Blueprint" may have been the culmination of a musical dream, it's not a peak by any means .

MacMaster is projecting an early 2005 release for the new album, which she intends to record with her band .

In fact, MacMaster says she has three more CDs in mind. She stopped herself short and asked aloud, "But what is the future of CDs? At what point will artists stop making money and start severely losing money on CDs?"A self-avowed technophobe - as is her husband - MacMaster doesn't own a computer, doesn't do e-mail (she has a secretary for such tasks) and has never downloaded a song .

"I'm not a techie-type girl," she admits. "Mine's to make music. But I can understand downloading. If I had a computer, and there was great music there for free, and I love this one song..." her voice trailed off. "It's a difficult decision ."

Because of the big financial commitment on the part of an artist, there's a danger that some music may never be recorded based on finances rather than creativity, she says .

"Things are changing in this industry. Musicians need to be motivated to record music," MacMaster says. "You can't go and invest $100,000 and not get your money back. They pour all their time and energy into that thing. Otherwise we'd be in the poor house ."

"The point is, musicians need to keep being inspired to record - financially. We can't let people stop recording because they can't afford to record. We've got to be able to record and have it pay for itself .

"I'd record the rest of my life if I knew I'd just break even ."