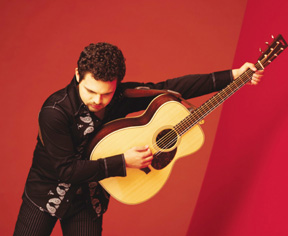 At about this time, Trevino was undergoing a personal transformation, which would affect his musical career.

"Up until that point, I had pretty much been at arm's lengths from my Mexican roots," says Trevino. "It's been fascinating for me to look at it. It's been a huge growth experience for me. I was always kind of assimilating instead of being Mexican. I was always ashamed of that music."

"When my son was born, the first thing I thought to myself is I want him to have more of an appreciation and love for his culture than I do."

"I jumped into that hesitatingly too," Trevino says. "Because I didn't say I'd love to do it. A lot of the songs pitched to me were songs my dad sang - the song that got me my first Grammy," he says bursting out laughing about his reluctance.

As for his son, "I just wanted him to love his culture more than I did. I've come to terms with it - the culture and the music. I've always been able to separate the Mexican food - the things I love about my culture - the food and family. The drinking and music I associate closely together. I have a lot of Mexican Americans come up to me and say they've experienced the same thing, mainly people from Texas and the Southwest."

On the mainstream music front, Trevino wanted out of Sony, but the label refused to let him go.

Six months later, they gave him his pink slip.

"I wanted a fresh start. I was moving in a different direction. I didn't feel that Sony was supporting it, and I was right."

"It was strange - they were angry that I'd asked off the label and all that stuff. They said, 'absolutely not.' Then they divorce you, six months later. It shocked me. I felt like I was growing as a musician and as a singer and a songwriter. I was going into my fourth album on Sony. I had actually cut the album and released one single that didn't do very well ("Only Lonely Me")."

"I was incorporating the Mexican sound. It sounded a little bit more Texas Tornados sounding, but a little more country than that."

"I was surprised (when Sony cut me)," he says. "It always catches you off guard. It's like you lost your job. It's like someone telling you they don't believe in you any more. It's an ego letdown there. Looking back, I think a lot of it was stressful because I had a brand new house, a brand new baby. On the one hand, it was very stressful. On the other hand, it was very liberating."

"I was in a funk for a couple of weeks, but it was time to move on and refocus and start writing songs and listening to music and keep our live show up and just keep creating music. There's no reason to stop just because you don't have a record deal."

In the meantime, Trevino released "Mi Son," a Mexican album on Vanguard filled with ballads and nothing to do with country, though he remained committed.

"My whole touring schedule and what I do for a living, my whole bread and butter, is country music. It's what I loved first and foremost. Los Super Seven and 'Mi Son' to me were more of a side project. It was easy for me to separate."

"It was a crazy time. I had guys on the road with me from the days we were out talking with Toby Keith and Tracy Lawrence. You're making a lot of money, good old deli tray gig. Catering and all of that stuff. You get used to a certain lifestyle on the road. Eventually things for me slowed down quite a bit. Tour dates for me slowed down. We were not in a bus. We were in a van. It was discouraging for me. It was discouraging for everybody."

Most of Trevino's band quit.

Trevino later played a few showcase gigs in Austin and Nashville in 2000, though nothing materialized until producer Paul Worley got a job with Warner and signed Trevino.

"We ended up getting another record deal, but it was two years later. But it was well worth it. If I would have gotten a record deal immediately, I probably would not have been ready because Raul and I had not written that much. I had been flying in from Texas to Nashville. We'd write for two or three days."

"The main thing we wanted to do a country record that had a Latin flavor to it," says Trevino. "You go back. There's Marty Robbins who's always kind of infused Latin flavors in a lot of his songs and Buck Owens and even Johnny Cash (the horns on "Ring of Fire"). That's kind of what Raul and I said - 'let's make an album that has a Mexican flavor.'"

Unlike his previous albums, Trevino had a hand in writing everything (all with Malo and others) except the closing, "Have You Ever Really Loved a Woman?" a pretty, acoustic version of the Bryan Adams song.

"We didn't listen to anything else," says Trevino of outside songs. "It was very clear from the beginning."

The album came out in September with the title track being the first single. If it sounds like something you may have heard real recently, it's entirely possible - if you have The Mavericks new disc. Both recorded the song. Trevino's version was on the charts for 20 weeks, hitting as high as 34.

"I'm also disappointed because I wanted to have a number one record, but it also did a lot because it opened a lot of doors for me. It made people take me a little more seriously than 'Bobbie Ann Mason'."

Trevino hopes "Overnight Success," the next single will do even better.

"That's kind of a little bit autobiographical," he says. "The title, of course, is a little tongue in cheek. I had a lot of people early on say 'you're an overnight success.' Here I am 10 years later, plugging away in a van down by the river."