Chip Taylor has had his fair share of fascinating jobs over the years from golfing with the pros on the greens to earning a ton of green stuff (the treasury-issued paper kind that is) as professional gambler. 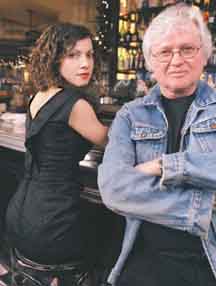 He's also enjoyed great success as a songwriter, with credits ranging from penning that classic garage rocker, "Wild Thing," to writing the gentler pop hit "Angel of the Morning," not to mention the many country hits he created for Nashville back in the Sixties.

But these days, Taylor is one half of a musical duo with fiddler/singer Carrie Rodriguez. This act has just released its third CD together, "Red Dog Tracks," and Taylor credits the chill factor, if you will, for its artistic success.

"When I was a young kid, I was very...even though I was from Yonkers, N.Y....I was a country music fanatic," Taylor explains. "I had a country band when I was a kid. I had a lot of favorite artists, but I would say that the majority of stuff that I liked was harmony singing. Like The Louvin Brothers, and the Brown Family and the Everlys. And with the race records down South, it was The Moonglows and The Moonlighters and The Mills Brothers and all those kinds of things."

"I loved harmony stuff. So after being back for seven years or so (performing music again) on my own, I hired Carrie (daughter of Texas rootsy singer David Rodriguez) as a fiddle player. I asked her if she sang, and she said she didn't, but she'd try to sing harmony if I needed her to. So I put a microphone in front of her when we went to Holland to play some shows. And all of a sudden, when I heard her voice hitting my voice with some harmonies - she'd try it a little at a time - I got a chill every time I would hear her sing with me."

"I hear a lot of duets that just don't give me chills these days. But when Carrie's voice hit mine I just got that physical feeling, those chills. I hadn't heard that in a long time. I guess the last time I heard that was Kimmie Rhodes with 'West Texas Heaven,' when she did duets with Townes (Van Zandt) and Waylon and Willie. I got a chill when I heard that, but I hadn't gotten that chill in a long time. But when Carrie's voice hit mine, I just got it, so it was really kind of an easy thing (from then on) to do duets."

In addition to creating beautiful harmonies together, both Taylor and Rodriquez also try and make each and every live performance into something new and unexplored.

"And now that we're doing it, it's hard to give up," Taylor admits. "Because every night we perform, I know that I'm going to experience something unique. We don't do things the same way all the time. We kind of go with each other's emotions as to how to phrase and stuff. So it's always magic, the stuff that's going on every night. So that's what motivates me - the passion and the inspiration. That's because we don't do things by the book every night; we're searching for some kind of vibe together. So for the foreseeable future, I can't see us not working together."

Even with this compatible singing partnership, Taylor hasn't much changed the way writes songs.

"I don't ever write with anything in mind," he says. "I don't pick up the guitar and say, 'Oh, I want to write this kind of song or that kind of song. Or I want to write this idea or that idea.' I just pick up the guitar and let stream of consciousness things seep through. And usually, songs will have to do with something that's very close at hand."

"Because I'm with Carrie and because I love the way her voice sounds, the inspiration probably just erupts in that direction. It's not because I haven't written other songs during that period of time; but so many of them that I've written have just seemed right for Carrie and me."

Additionally, Taylor sees this musical relationship as a true team, rather than a situation where the presence of another artist merely compliments his own work.

This latest release features the eclectic, electric guitar work of jazz musician Bill Frisell, which, on the surface, seems like a rather odd collaboration choice for this popular Americana act.

"Carrie and I went to see a performance by Bill Frisell in New York," Taylor recalls. "She was influenced by an album she had gotten from a boyfriend that she had talked about called 'The Willies.' I got to love that album, so we went to see Bill and got to meet him. I've been around some vibe-y guitar players - the guy that tours with us on the road is John Platania, who was the guy that played with Van Morrison on 'Moondance' and 'Domino.' So John's a very vibe-y player. Bill's a very vibe-y player."

"But when I heard Bill's stuff on 'The Willies,' when he did 'Cold, Cold Heart' and 'Goodnight Irene' and stuff like that, there was a certain thing that just felt right. And Carrie was really excited about the thought of it, and I got every album that I could find by Bill. And I saw that this country thing had kind of taken over him since 1999. And it wasn't like when an outsider jazz guy all of a sudden does country songs. It was like the real deal, a true love in his heart that had him kind of having this beautifully sensitive feeling for this kind the music."

"It's almost like people would say, 'Well there's a jazz singer named Norah Jones, and she's going to do some country songs.' Well yeah, okay. But Norah's heart is there, and she's one that can do it because she lives it and believes it - somehow. Bill was like that. Bill is really so true to that stuff."

Although Taylor and Rodriguez were both convinced of Frisell's true believer-hood, such faith was no guarantee that he would also work with them.

"We didn't know if he would do it or not," Taylor recalls. "We sent our albums out to his manager, and his manager said, 'Oh, I don't think he'll have time.' We sent these two albums, and in the next few days, the call was back that he really wanted to record with us. From then on, it was just a whirlwind thing of making the plans. We were all excited about doing it. And he's such a damned nice guy! He's the gentlest soul you've ever met. We met with him in my apartment in New York, and he was so into it. There was a lot of passion floating around."

When Taylor speaks over the phone line, he does so with plenty of passion and enthusiasm. You'd never guess that such a seemingly chipper guy could ever write the kind of dark songs that fill up "Red Dog Tracks," though. This is because there's a whole lot of cheating and a bunch of hard drinking being done by these various album characters. So is Taylor, the man, any different from Taylor, the songwriter?

"If you get me at different times, you might hear different things from me," he admits. "Here's what it is: I don't edit my emotions when I write. And maybe I should, and maybe I shouldn't. I don't know. But when the emotion comes out, and I'm getting a chill, I don't say, 'Yeah, but I can't talk about this, or I can't talk about that.' The passion overrides everything else. And I just let it come out."

Whenever Taylor lets his passion take the wheel, even he's sometimes surprised by where it leads him. This spirit may, for instance, draw out songs that differ greatly from his usual writing style.

"There happens to be a couple of story songs on the album, and I never write story songs," Taylor says. "I don't know why they came out."

There are also numerous girls in trouble running through these songs. "They'll be in trouble if they hang around me," Taylor laughs.

Taylor's history as a golfer and a gambler may seem out of place, especially when viewed alongside his various musical accomplishments. But each of these endeavors point back to the dedication he puts into everything he masters. Accomplishments become like drugs.

"Everything I've ever done, I've done it with an addictive personality," he explains. "I certainly was addicted to gambling, even though I was very good at it. I get addicted to almost anything I do. When I get involved with anyone (romantically), that becomes an addiction too. I don't do things on the periphery; I tend to dive in. I'm glad I haven't been able to get rid of this (songwriting) addiction. I love the gambling stuff. It was wonderful years I had with that. But playing for people and having the spirit of the music take over me when I'm creating it - this is the best part of my life that ever was."

When you stop and think about it, Taylor has taken a long and winding road to finally arrive at his current artistic destination.

"It was like all my dreams as a high school kid," he elaborates. "I kind of had to hibernate to survive the business and become a songwriter for other people. Now it's like this is the best time. I'm kind of focused on one thing, and I have a total passion for it."

It may be hard to reconcile the music Taylor makes today with a rocking little tune like "Wild Thing." But he's obviously evolved from being a wild thing to becoming more of a vibe-y thing, instead. His enthusiastic anticipation of the future is simply contagious. He may have lived more lives than your average cat, but Chip Taylor is clearly focused on what's to come, rather than what's already happened.

"But if I throw myself out there with Carrie, something beautiful is going to happen. I hope the people enjoy it, too. But I know something's going to happen with me on that stage when we're out there that's just going to vibrate through my whole being. And it's going to make me feel so great. And I know Carrie feels a similar kind of thing."