Nitty Gritty Dirt gets back to roots

The age-old adage that says, "absence makes the heart grow fonder," could easily apply to the Nitty Gritty Dirt Band's new recording, "Welcome to Woody Creek," by making a few substitutions - the word 'heart' with 'music,' and 'fonder' with 'better.'

The 'absence' in this case was John McEuen, who left the band in 1987 to pursue some solo projects, but rejoined his perennial pickers in 2001. 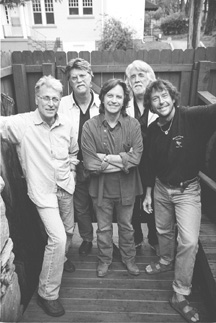 According to guitarist/vocalist Jeff Hanna, McEuen's return rejuvenated the group. Essentially, it was the first step towards creating "Welcome to Woody Creek."

"John returning coincided with us doing the 30th anniversary reissue of the first 'Will the Circle Be Unbroken' album," he explains. "We had a little bit of a chance to work together outside of the studio, and he joined up in the summer of 2001, and we starting touring again, which was great... Then, Capitol Records Nashville asked us if we wanted to do a Circle III album because we had done the second album back in '89, and we said 'sure that would be fun, especially with John back playing with us."

"We did that, which was a special project, not just a Dirt Band album because (of) various other pickers and singers joining us," he continues. "But, having done that record, which was a return to our roots as it were, inspired us to make a record that was just us, but to do it in a looser fashion."

"We had a nice backlog of songs because we hadn't been in the studio to make a new record since 1998 and hadn't done one with John since 1987," says Hanna. "We had a bunch of tunes that just kind of fell out of the sky. We had piles of these songs, and the ones that sounded the best with us playing and singing are the ones we recorded."

The band's sound has constantly evolved with each decade. From psychedelic rock in the late '60s to their first Top Ten pop hit, "Mr. Bojangles" in the '70s to the middle-of-the road country throughout the '80s, with number 1 singles on the country music charts such as "Fishin' in the Dark" and "Long Hard Road (The Sharecropper's Dream)," there's little that the NGDB haven't accomplished in a recording career that spans almost 5 decades and more than 30 albums.

Twenty years ago, they even made headlines as the first American rock band to tour the Soviet Union.

The acoustic-driven "Welcome to Woody Creek" marks a return to the band's roots. Upon a first listen, the masterful musicianship and the tender three-part harmonies that NGDB fans have come to appreciate throughout the years spills from the speakers in a joyous exclamation to produce one the year's most honest, heartfelt discs.

So, how does a group that has been playing together for 38 years keep things fresh?

Hanna believes it comes down to the fact that when he and his four musical hombres get together to make music, something magical happens.

"There is an intuitive thing that happens with us when we play together," he says. "Somebody pointed out that the five of us make a noise together that nobody else does...It's a simple way to look at it, but it works for me."

That said, there were times when Hanna and his mates were ready to call it quits, but the allure of rediscovering this unique 'noise' has always kept them together.

"It's a lot easier to break up then stay together," Hanna says. "It's weird. There have been times when we felt like throwing in the towel, and then something good would come into our lives, and it would change our minds. I think also that the loyalty of our fans has kept us on the road and in the studio all these year...we enjoy playing together. The touring gets a little old at times, but I shouldn't whine. It beats the heck out of a real job."

To record their latest disc, which Hanna describes as "light-hearted and breezy" the band of musical brothers returned to a familiar place - Ibbotson's mountainside retreat - in Woody Creek, Col.

"Ibby," as the band members affectionately call him, calls his home studio Unami, after a tribe of peace loving Lenape Indians, Utes and Eastern Arapahoe that used to spend summers in the area.

The band describes the charm of this area in the album's liner notes: "Woody Creek runs into the roaring fork of the Colorado eight miles down from Aspen. It's more like Aspen was in our early days...Aspen is a playground. Woody Creek is where the old timers drink and eat and live. Because of the hospitality of Woody Creek citizens, it still feels like home to us."

Recording in this peaceful, rural retreat inspired these 'old timers' to record a pleasing record of down home, country-roots music. "We were shooting for that...trying to get something that kind of harkened back to the music that we made in the seventies when we first started playing country rock," Hanna says. "When there was a little more spontaneity in our approach and a little less profession involved."

"Ibby has a really nice room that he had built ... it's a really great room for playing music," he continues. "We augmented some of the gear he had with that of a friend of ours from Denver named John Macy who has engineered a couple of records for us. He came up with his big old hard-disc rig and a bunch of great vintage mikes, and we just kind of hunkered down. We only recorded there for about a week, but managed to get down 8 of the 12 tracks that are on the record."

Keeping with the sense of renewal and rejuvenation that permeates the new album, the Nitty Gritty Dirt Band recorded "Welcome to Woody Creek" without a record deal and then decided to shop it around.

Hanna had heard good things about the boutique Nashville label Dualtone, and this new relationship has proved the perfect fit.

"I had my eye on them for a while," Hanna says. "There are guys that are part of our management team in Nashville that had worked with them in the past, and they had given them really high marks. We really like the vibe of the music that comes out of that label and their grassroots approach to promoting records and distributing them."

"They were very hands off when it came to the production, which we appreciated," he adds. "In fact, essentially we turned it in and said 'here's the record."

Not wanting to lose any of the rustic feel created at Ibbotson's mountainside retreat, the band searched out a legendary studio back in Music City to complete the record.

"We then came to a studio here in Nashville called Quad, which also has a great history to it," says Hanna. "Neil Young recorded a lot of 'Harvest' there ... Dylan and Fogelberg and a bunch of great folks have also come through there. They had a long list on the wall at the studio, and it was pretty amazing. It definitely had more of an old-timey vibe too, and we enjoyed that. Just getting off the clock a bit, which is how we used to make records, and that was really refreshing."

When it comes to keeping things fresh while on stage, Hanna says that it's about achieving a balance between the old and the new songs, and between keeping the band members happy and their longtime fans satisfied.

"The stuff that's most fun for us to play is the brand new stuff," he says. "As much as we enjoy playing the new music, audiences really love the classic stuff. So we go out and play 4-5 songs on average from the new album, and that's a nice taste."

"We try to make our concerts something for everybody, including us," Hanna continues. "We want to have a good time or it's a waste of everyone's time. As a fan, I hate going to see somebody, and they virtually ignore their old stuff, that's always frustrating ... it drives me crazy. The extreme of that is that you go see somebody, and they are just sleepwalking through these old songs that they are obviously tired of, so it's finding that balance."

If the new album is any indication, it looks like the Nitty Gritty Dirt Band are managing that balance quite well. "Welcome to Woody Creek" features a couple of choice covers, along with the 10 original tracks.

One cover is a foot-stomping, bluegrass version of the Beatles' "Get Back." Hanna reveals that the group used this classic Fab Four hit as their sound check song throughout the recording sessions.

"We had actually been playing that version of 'Get Back' on stage since the late seventies...just messing around and audiences really seemed to enjoy it," he says. "When John (McEuen) started playing with us again, one of the first things we did was to bring that back into the fold. We got into the studio and did it in like two takes, and it sounded great, and we said 'okay we got the first track.'

"It's kind of strange doing covers," Hanna adds. "We have always enjoyed playing them, and we have recorded quite a few over the years...Buddy Holly, the Everly Brothers and stuff like that, but it gets a little sacred with the Beatles...but they are just as fair game as everybody else."

The other cover on the new album is Gram Parsons' "She." It's a warm reworking sung by Carpenter that features harmonies that only the Nitty Gritty boys can create.

"The Band was a big influence on us," Hanna explains. "When we came up with that arrangement, we were thinking in terms of how would The Band do it. I think it worked out pretty well with the mandolin, the accordion and the harp."

Elsewhere, the harmonies are as sweet as ever; especially on the country ballads "Jealous Moon" and "Old Time's Sake." Hanna likens choosing the rest of the songs for the Woody Creek sessions to shopping. "It's just kind of like going into a shoe store," he says. "You try to get the stuff that is comfortable or stuff that you know you can at least break in after a week or so."

The album closes with an earthy acoustic instrumental - "Midnight at Woody Creek" by McEuen (acoustic guitar) and Fadden (harmonica), which displays their accomplished playing, and perfectly captures the spirit of the band's mountainside retreat - showing that these old timers only get better with age.

So, beyond promoting the new disc, what's next for these old timers?

"We have some ideas banging around," concludes Hanna. "We would like to put a box set together and some of the folks at other record companies that we have worked at in the past are talking about other compilations...sometimes stuff comes out without our input - these greatest hits records and stuff, usually they are more successful when we're hands on, so we are going to try some of that going on again, which would be a cool thing."