On the morning of Nov. 15, the story of one of the top studio teams in the history of country music came to a close with the death of steel guitarist Wesley "Speedy" West at the age of 79.

Although West hadn't performed in 20 years, during his long career he'd played on literally thousands of sessions for hundreds of artists - mainly country performers, but also occasionally with pop acts like Bing Crosby, Kay Starr and Spike Jones. 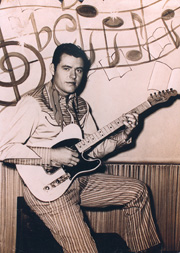 At the center of his reputation, though, is several dozen hot bebop-influenced instrumentals recorded for Capitol between 1950 and 1956 with guitarist Jimmy Bryant.

The recordings made by the West/Bryant team (which also usually included bassist Cliffie Stone, rhythm guitarist Billy Strange and drummer Roy Harte) were a groundbreaking mix of country and jazz; clearly influenced by western swing, but outpacing even the most radical recordings made by Bob Wills' Texas Playboys and Spade Cooley's Orchestra in the mid-'40s. West's wild volume swells and pedal tricks provided the perfect accompaniment to Bryant's precise, breakneck lead guitar work.

Although the West/Bryant instrumentals have been reissued on several releases since the mid-'90s, none of Bryant's original solo recordings had ever been reissued on CD until the release in late November of the 3-CD collection "Frettin' Fingers: The Lightning Guitar of Jimmy Bryant" on the Sundazed label.

Born in Georgia on March 5, 1925, Ivey J. Bryant, Jr. (he didn't adopt the nickname "Jimmy" until he was in his mid-20s) was the oldest of 12 children. By most contemporary accounts, Bryant's father was a sharecropper and music lover who was proficient on several instruments. He, in turn, encouraged his son's interest in music at an early age, even building a fiddle out of a cigar box for his son. Unfortunately, Bryant's father also had a bad temper and a fondness for the bottle, characteristics which would sometimes surface in the son later in life.

"My mom and dad got divorced when I was born," says Bryant's son, John. "So when I was growing up, he'd come get me on the weekends. We'd go jeeping in the valley because there was a lot of open space, but he didn't really know how to be a father because he didn't have a good role model."

During the years of the Depression, Ivey Jr. (alternately called Buddy and Junior around this time) supplemented the family's income by playing fiddle on street corners. Drafted in 1943 when he turned 18, Bryant was shipped off to Europe where he served with General Patton's Third Army, participating in the invasion of Germany.

Severely wounded by a grenade in early 1945, Bryant sat out the closing months of World War II in a hospital, spending the down time recovering and teaching himself to play guitar. When he emerged from the hospital a few months later, peace had broken out, and Bryant found himself in demand by the USO as both a guitarist and a violinist.

After being discharged, Bryant returned to the U.S., purchased an electric guitar and an amp and spent the latter half of the '40s in Georgia, Nashville and Washington D.C. before heading to Los Angeles, where he'd been told there was growing hillbilly and country music scene, thanks largely to a huge influx of southerners during the '30s and early '40s.

"He kept hearing about California," says Jimmy Bryant's sister, Lorene Bryant Epps, who is the author of the biography "Jimmy Bryant: Fastest Guitar in the Country." "He and Russell Hayden and Doug McGinnis (two other musicians with whom Bryant was playing at the time) went to California together in a '37 Ford, and they played (gigs) all the way there. And when he got there, I remember he said (he) was not disappointed. He loved it from the start. And it wasn't long after he got there that he met Speedy West."

West, about 25 when he and Bryant met when playing down the street from each other in separate bars, was already a first-call studio musician at Capitol in 1949 and was one of the first steel guitarists to make the switch to pedal steel guitar, which offered greater sonic possibilities than the earlier non-pedal models. Late in 1949, West began appearing on Cliffie Stone's weekly TV series "Hometown Jamboree," and following the departure of guitarist Charlie Aldrich the following year, Bryant soon joined him.

Asked when he first became aware of the West/Bryant recordings, Dickerson says, "Believe it or not - and I'm not making this up - I found the 'Two Guitars Country Style' album at a garage sale for 25 cents when I was about 15 (or) 16 years old. I bought it because I remembered Ray Campi mentioning them in an interview. At the time, I was just a dumb little rockabilly kid. Never heard western swing or hot jazz in my life, but when I heard Jimmy Bryant's guitar playing it was like hearing the Eddie Van Halen of the 1950s. His speed and his phrasing...blew my mind."

Although given a great deal of creative freedom by Ken Nelson at Capitol and by Cliffie Stone on TV, Bryant chafed when given directions or suggestions. By 1955, he quit "Hometown Jamboree" and quit doing sessions for Capitol the following year.

"I've read that Jimmy could ' be difficult to get along with and that he didn't like playing 'commercial,'" says Dickerson. 'He liked playing 'outside,' which he was better at than anyone else in the world, but it doesn't get you hired for mainstream projects."

Bryant did a little of this and that during the remainder of the '50s and into the early '60s: session work (he can be heard playing fiddle on the Monkees' "Sweet Young Thing"), production, and some live performances before landing a long-desired solo contract with Imperial Records in 1965. He also wrote "Only Daddy That'll Walk the Line" done by Waylon Jennings in 1968.

The new Bryant collection compiles most of the important West/Bryant instrumentals, as well as a strong cross-section of Bryant's solo recordings made between 1962 and 1967, including 5 previously unreleased tracks.

"When that stuff was coming out, I was in grade school," says Jimmy Bryant's son, John. "When we'd have show and tell, I'd bring the albums - 'This is what my dad does.' I remember one time, I was walking through this parking lot for a grocery store, and I looked over and there was this band on a stage. And it was my dad. It just seemed like that was the norm."

Asked why he thinks Bryant's solo recordings have been out of print for so long, Dickerson says that there really isn't much of a mystery, attributing it to "lack of interest, mainly."

"There are cyclical musical styles that people get interested in," says John Bryant. "Since the mid-'90s I've been doing a lot of work to keep his name alive. I think that Bear Family (the German record label put out a set in 1997) collection helped."

John Bryant says he possesses some unreleased recordings of his father, some of which will probably see the light of day sooner rather than later.

"Audie Murphy (the U.S. war hero and actor who was also a close friend of Bryant's) bought Scotty Turner (Bryant's producer in the '60s) a brand-new multitrack recorder in the mid or late-'60s. Scotty and my dad set up this recorder, and my dad and (jazz guitarist) Herb Ellis were jamming, and they recorded all this stuff. There was a drummer and a bass player in another room, so it's got good separation. I've got the master (tape), and it is just so much more jazzy than anybody's heard. I'm going to be releasing (it) early next year."

During the '60s, Bryant had learned to read music well enough to be competitive with other Nashville pickers, but the acerbic nature of his personality seems to have been in full flower during this period, and he made at least as many enemies as friends while in Nashville, though he and Speedy West did manage to get together to record one final album in 1975 (released in 1990 on the Step One label as "For the Last Time").

During the '70s, Bryant tried his hand as a Nashville session musician, but found that his style was less in demand than it had been 20 years earlier and 2 thousand miles away.

John Bryant had less frequent contact with his father as a teen, since he remained in southern California while his father lived elsewhere.

"I was in high school, and he was living off in Nashville. I went into the Air Force, then he got sick, so I asked the Air Force to transfer me to Georgia to be near him. They said no and sent me overseas. It was kind of a drag. When he got sick, I flew over there to be with him for a while. Then when he got real bad I was there for a couple of weeks before he died."

Bryant was diagnosed with lung cancer in 1978; probably the result of a lifetime of smoking. Although surgeons removed most of Bryant's right lung, the cancer was found to have spread to his heart. Radiation therapy slowed the cancer, but did not stop it.

Bryant's final public performance was in August 1979 at the Palomino Club in L.A. Bryant was by all accounts in terrible shape (he was on furlough from the hospital that evening and was helped into the club by two friends), but turned back into the Jimmy Bryant of old when he had a guitar in his hand.

Moving back to Georgia the following year, Bryant died Sept. 22, 1980.

The year after Bryant's death Speedy West's musical career was ended by a stroke. Although he recovered to some degree and attempted to start playing again, the stroke left the right side of his body with a combination of pain and cold, and playing soon proved to be impractical. During the remainder of his life. West contented himself with a growing reputation as an honored guest at steel guitar conventions around the country.

Asked if there are any guitarists around today whose styles remind him of his father, John Bryant says, "Today? There's no one else out there who's doing Jimmy Bryant."

Asked about his own musical interests, Bryant seems uncomfortable with the thought of living up to his father's reputation as a guitarist, initially fessing up only to playing drums.

"It's funny with this business, because people introduce me - 'This is John Bryant; he's Jimmy Bryant's son, and he's a great drummer' - and they've never even heard me play. People just think that you follow in your father's footsteps, but I've never felt comfortable with a guitar in my hand."

Bryant soon admits, though, that Fender's introduction this year of a Jimmy Bryant Telecaster modeled on his father's instrument (complete with trademark leather pickguard) has prompted him to finally tackle the guitar.

"Now that this guitar is out, I've been picking it up lately," says Bryant. "And it feels pretty darn natural. I'm learning how to play it and understanding theory. Since I have a JB Tele, I've got to do something with it."