Musicians can at times be a naive bunch, believing in the good in everyone and giving all the benefit of the doubt. These same musicians are often the ones that get hosed when it comes to signing contracts and other legal paperwork. But for anyone trying to pull the wool or any other fabric over the eyes of Scottish singer-songwriter Roddy Hart, think again. Hart has a law degree to fall back on. 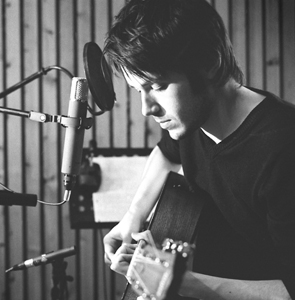 "I didn't really feel old enough to be writing about some things," says Hart, 26, on the phone from across the Atlantic. "Sometimes what I hate in music is insincerity, and if you're particularly young, sometimes it can come across as if you don't really know what you're singing about. You've not really necessarily had the life experience."

Although he took the time to complete the degree, Hart also kept writing and honing his craft. The end result was his 2004 debut "Home Tapes," which earned him a loyal following, in Great Britain.

"I recorded a bunch of songs that I put together over the years, and I bought a little 8-track recorder, a Roland 8-track digital recorder," he says. "I just sat in my bedroom at my mom and dad's house where I was living at the time and recorded about 12 tracks in a week."

The musician also says he was surprised by the album's moderate success despite the fact he'd never played a solo gig in his life.

"I was really quite young, and my voice was completely different," Hart says. "I was still trying to find a style. But that really served its purpose because it let me raise enough money by going around gigs and selling that album."

Starting small, Hart took the money from "Home Tapes" and put it towards his latest effort "Bookmarks," his U.S. debut on Compass. The album is a very strong collection of singer-songwriter tunes that bring to mind a cross between Rodney Crowell and The Jayhawks' lead singer Gary Louris. Hart sees "Bookmarks" as his true debut effort, and he's extremely happy with the response.

"I'm delighted to be honest because when I started the album, it was literally with no budget," he says. "I didn't have any deals on the table or anything like that. To go from that stage recording these songs in a small studio going slightly mad in Glasgow to the stage we are now where people are just getting to hear it has been amazing."

Unlike some artists who record a lot of material, Hart recorded 13 songs for "Bookmarks," the same 13 that made the final cut. "A few people kind of said the same thing that it worked really well as a 13-track album," Hart says. "So, they kind of convinced me to do it that way."

Hart also says the songs that ended up on "Bookmarks" all had a certain feeling to them. This is evident whether listening to "Suffocate" or the closing "Journey's End." "I know we're in a digital age, and a lot of people want a single track a lot of the time," Hart says. "I think that there's still a huge audience for an album that has a certain feel about it and that was what was important to me - a collection of songs that sat alongside each other and felt like they were part of the same album rather than a collection of singles or individual songs that you would want to grab off the Internet at times. I'm a bit of a purist in that I love the idea of a whole album."

But like several albums worth their salt, Hart says making it wasn't exactly a walk in the park. After finishing the writing, the sound of the album changed due to the addition of musicians, including some members of Scottish band Trashcan Sinatras.

"I took a break from the album, and it still wasn't quite right," he says. "It didn't sound the way I wanted it to sound, but that was really due to the fact the arrangements weren't fully formed yet. I took two months off and put a band together, and we played some gigs. Then all of a sudden the songs came together, they were much tighter. So I went back and re-recorded a big chunk of it, and it happened a lot quicker."

Hart also says producer Paul McGeechan, a member of the band Love & Money, also brought a lot to the table. "He's very kind, and he's brilliant," Hart says. "He really added in terms of someone to bounce ideas off of because I'm quite stubborn, and I know what I want. Sometimes that can be to the detriment of the record. It was good to have somebody there to chip in ideas, but mainly for me to bounce ideas off of and to use as a kind of distilling process."

But perhaps the biggest highlight Hart had in making "Bookmarks" simply came from blind luck. Two songs feature backing vocals by the legendary Kris Kristofferson, including "Home" and "My Greatest Success." Kristofferson was in Scotland filming "The Jacket," the 2005 film starring Adrien Brody and produced by George Clooney when he decided to do something he never done before - a solo acoustic show in Glasgow.

"I got called because he was looking for a support act, so I submitted a CD for it, and he said he wanted me to do it," Hart says. "It was just supposed to be one or two shows, but it ended up being eight or nine shows because he asked me to do the English dates with him. It was an amazing experience."

Hart had a rapport with Kristofferson during the shows, something he says he never took for granted. In fact, Kristofferson had Hart open up his shows earlier this year, even performing with Hart during his support slot.

"He was such an encouragement, he said to me the last night to never give up because it's so hard these days to get noticed, but never give up. I told him I was about to start recording my first album ("Bookmarks") and said, 'I'll send it to you when it's finished.' He said, 'Well, I'll sing on it.' It was as easy as that. I was gobsmacked!"

Kristofferson recorded his vocals in Hawaii for both songs, including "My Greatest Success," which Hart describes as being "country-oriented."

"I put his vocals together with a Scottish singer called Eddi Reader who I've toured with before," he says of the song. "She was singing in this Emmylou Harris kind of way, she's sort of a Scottish Emmylou Harris, she's got a brilliant voice. So, I put their voices and their parts together, and I had my part in the middle." "I got shivers down my spine, it just was a great moment to hear these two people that I admire so much as songwriters and performers and then me singing with them," he adds. "It's really of the moment, sometimes things can arrive out of nothing, and you get a real buzz from it."

Of the baker's dozen on the album, perhaps the fastest, upbeat song is the pretty and catchy "Flames," which would make Ryan Adams jealous. Hart says it was also one of the songs taken from "Home Tapes" and brought to "Bookmarks."

"The 'Home Tapes' version had a real Van Morrison arrangement to it," he says. "I played a bit of saxophone as well, and I threw that on there on the 'Home Tapes' recording. It wasn't quite right, so I decided to transpose it a wee bit and took it down a couple of keys. We set the tempo a wee bit different. Paul Livingston, the lead guitarist from the Trashcan Sinatras, came up with this brilliant, brilliant riff. We sat and worked out the song together, but he's got these syncopated rhythms and riffs that really set up the song.

"'Flames' is okay, I don't mean it's a throwaway pop song, but there's value in that as well," Hart adds. "It's three and a half to four minutes, and it serves its purpose. It's great fun, and it always seems to be the one that people instantly like, and that gives you the passageway into the rest of the album and songs that might take a bit longer to get into or grow on you."

Another memorable tune is the opening track "The Life And Times Of Joseph Rowe," a song which Hart is a bit coy about. "I don't know if Joseph Rowe is my alter ego, but his identity shall remain unrevealed," he says with a laugh. "That song was inspired by The Band and Jackson Browne's early stuff. There's piano, bass, drums, and there's these big harmonies in the chorus. It was just a song I wrote in 5 or 10 minutes and just loved it."

"There are about 10 verses for that song, and only 2 or 3 verses made it to the final cut. I redrafted and redrafted, so there's probably a few bootleg versions of that song going about. It's a great song, and I wanted to do a song that had subtleties, a kind of stripped down arrangement. It was always just a no-brainer that was the opener for the album. It really set the tone."

Although he's relishing the current response to "Bookmarks," Hart is already looking forward to getting back into the studio. He says he has about 20 songs at various stages for the next record and will probably pare that number down to an even dozen. He thinks he'll be back recording later this summer.

For the time being, Hart will have to be content with playing shows and having his fan base growing slowly but surely. "The people that are coming to the shows are really loving it and are big fans of the album rather than just being indifferent to it," he says. "There are people that are showing a lot of enthusiasm for what I'm trying to do and that means a lot as well and there's something to build on."

And he feels that his career will only go up from here.

"I think gradually things are getting bigger and better for me, and that's the thing that keeps me going," he says. "It's almost like the carrot in front of the donkey, there's always something that's getting bigger and bigger. Even the people who play on 'Bookmarks' and doing tours with Kris Kristofferson and people like that, that's encouraging me not to give up and to keep going.

"It's not necessarily coming from a major label, but people are sort of seeing some value in it, which means more than anything to me. I always would find it too difficult to give up anyway because I've always got about 10 to 15 new songs that I feel people have to hear."