Album: Nowhere Nights
Song: I Was a Photograph 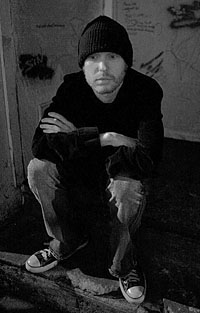 Album: "Nowhere Nights"
Song: I Was a Photograph

Bio: With the release of "Nowhere Nights," Kasey Anderson is now 4 albums into a professional music career that, while only a half-dozen years old (his debut "Dead Roses" dropped in 2004), feels incredibly mature. Paste called him "a literate workingman's poet," and the 11 songs on "Nowhere Nights" support that description in spades - only this time out, Anderson himself is at the center of his poetry. The bulk of the album deals with Anderson's 8 years in Bellingham, Wash., which he left in '07 to return home to Portland, "leaving behind a few good friends and more than a few burnt bridges, some of which are still smoldering." That's an appropriate image, as Anderson proves to be the master of the slow burn on the album-capping Real Gone, while elsewhere songs, such as the aptly titled All Lit Up, flame up and crackle. But at the center is a song about someone else - American soldier James Blake Miller, subject of the instantly iconic "Marlboro Man" photo - and it's a credit to Anderson's touch that the song fits in seamlessly. And it's a credit to his passion when it comes to music that he's recently launched a label, Red River Records.

CST's Take: Rootsy rock with a lot of heart and/or heart-baring rock that honors its roots (as in echoes, in varying degrees, of all listed under "Musical Influences" above)

Country Standard Time: You seemed to have a lot to get off your chest on "Nowhere Nights," so I'll start with a question I asked another songwriter recently: Do you find it easier to write a song or sing about things on your mind than it is to talk about them?
Kasey Anderson: Maybe for some folks, not necessarily for me. What you have when you write a song is the benefit of brevity. You've got 300 words or so to work with, so there's a necessity to trim the fat that doesn't exist in day-to-day conversation. You've got two lines to establish context and setting, so that tendency to over-explain and contextualize every little thing is a luxury you're not afforded. People can get lost doing that, songs remove that option. Then again, there's an eight-minute song on the record that's the wordiest thing I've ever written, so what do I know.

CST: On a similar note, is it easier to write a song that's completely based on what's going on in your life, that's inspired by events in your life or that has absolutely nothing to do with your life? And I guess there's a follow-along question there: is it even possible to write a song that doesn't have at least a little bit of you in it?
KA: I suppose if you get to be good enough, the line between the two is pretty blurry. You want the characters to be human, to be relatable, so there's always an aspect of something real in there; there has to be. For me, there was nothing easy about this record. It came from writing exercises that were intended to be entirely cathartic, and they ended up being exactly that. The decision to make a record of it was just an extension of the realization that everything I had to say, I wanted to say out loud.

CST: "Nowhere Nights" is an emotional album, not only the lyrics but also the singing, the playing, and the overall mood. How gratifying and/or necessary is it for you as a writer and a performer to get an emotional response from a listener, be it someone watching you play live or hearing from someone who was moved by one of your songs? Any examples you can share?
KA: It was an emotional process. The writing was very emotional for me, the whole process of having to look myself in the eye and face everything. And the recording was emotional, too. We had been playing these songs for six months, and everyone went into the sessions with the best intentions, but it's one thing to say you've got an open mind and another thing to practice it when you're confronted with an idea that doesn't jibe with yours. As a band, we had sort of worked ourselves into believing there was one way to play the material, and when Roscoe (producer Eric Ambel) started looking at different angles, people started to bristle a bit. The songs came out better for it, and that's why you hire a producer, but it was rocky for a little while.
As far as connecting with the audience, I think if you mean what you say, it's going to hit somebody, somewhere. People can smell a fraud. I wrote the song I Was A Photograph so people would hear James Blake Miller's story, and so far the reaction has been really song. When James contacted me to let me know he'd heard the song, that was a really big moment for me as a writer. I struggled really hard with whether or not to include that song on the record, not because I wasn't proud of it, but because I didn't want to lose James' story in the middle of 10 other songs about the State of Me. But the more we played it, the more I started to believe that, not only did it belong, but that it was the centerpiece of the record.

CST: And speaking of emotional, Real Gone is an honest-to-goodness tour de force. It's not just a long, dark night of the soul; it's more like a long, dark month. It keeps me riveted for the whole seven minutes plus, and that's saying something. Please talk about that song, if you will. It has the feel of a song that just kind of poured out all at once....
KA: There's a Josh Ritter song, Thin Blue Flame, from the "Animal Years" record, where Ritter spends seven minutes recapping the record and looking around him to see if anything's changed. The first time I heard that song I knew that I wanted to close "Nowhere Nights" the same way. I felt like, if I was going to drag people through 10 years of my life, then I couldn't just leave the book open. It needed a The End, and that's Real Gone.
I had the riff - it's really just the 2 chords, and the chorus - so I just recorded 10 minutes of the riff and put it on a CD. I wrote the song while I was driving up I-5 from Portland to Bellingham for a gig. I edited maybe five words after that first draft.

CST: "Nowhere Nights" reminds me of some of my favorite records, from folks like Steve Earle, Matthew Ryan, and Richard Buckner, but without being derivative. I like this quote on your Web site: "Almost all of my favorite records came to me by way of suggestion from a friend." Can you talk a little about some of those favorites and how they might factor into your work?
KA: I love those artists you mentioned. I'll be out on tour with Matthew in February, and I'm really looking for it. His songs are masterpieces. Earle's records I knew because my folks had them on while I was growing up. I got really lucky that way: there was always music on in the house. And, with the exception of the occasional foray into Eagles territory, it was always good.
All of those Whiskeytown records I came to by way of suggestion from friends. Prince's "Sign O' the Times" record was given to me by a friend, and that is maybe my favorite record ever. Six String Drag, Horse Feathers, Joe Pug - all those records were given to me by friends, and they're all some of my favorite records. Any time somebody I trust hands me something and says, "You gotta hear this," it carries a lot more weight for me than any Pitchfork review or KCRW song of the day. That stuff's great, too, and they're great resources, but for me, it's so much more personal when somebody you're connected to hands you a record because they think you'll dig it. That's part of what sustains art, that tangible ability to connect people.

CST: I also wanted to mention the digital-only release from last year, "Way Out West," a collection of covers. How hard was it to narrow the list of songs to 10? And I was thrilled to see Marah's Round Eye Blues on the song list. (I have zero musical talent, but I've always said that if I magically received the ability to play guitar and sing, Round Eye Blues is the first song I'd work up for my set.) What led you to that song?
KA: They were all songs I have been playing for a long time, so it was just a matter of choosing 10 I felt were a good representation of what I do, and what I listen to. (The exception being Keith Urban song, as it's the only Keith Urban song I know.) There are a bunch of tunes left over, and maybe I'll do it again sometime. For a record I made on my laptop in hotel rooms and tiny apartments, I'm pretty proud of how it turned out.
I first heard Round Eye Blues when I was in college. I was writing a paper on Vietnam, and I asked around for some songs that had been written from a soldier's perspective about the war, and that one was recommended. It's one of my favorite pieces of songwriting, and definitely something I kept in the back of my mind when I was writing I Was A Photograph.

CST: So what's it like to be in the record label business? How's it going at Red River, and what are some things that are planned?
KA: It's been great so far. We've got my record this year, followed by Chip Robinson's first solo record, and those records are why I started the label, so it has been really gratifying to see them received so well thus far. Later on in 2010, we're going to be putting out the Tallboys of Kentucky and Natalie D-Napoleon's records, and we're working on a benefit compilation for the West Memphis Three Legal Defense Fund, that's going to have some of my favorite artists on it, some of my heroes. So that's something we're all really looking forward to. It'll be an exciting year, and I'm sure there will be obstacles and we'll have to keep learning with everyone else as everything keeps changing, but I think we're fighting the good fight, and I'm one of those guys who believe that the good guys can win.