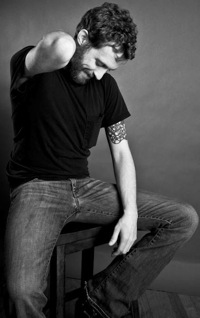 Musical Influences: "The Grateful Dead, The Band, John Hartford, George Jones, Gram Parsons, Otis Redding are probably my go-to top six for things that originally influenced me to do this and never stray far from my ears. There are countless others though. I always hate this question."

Bio: You've got to like Allen Thompson's self-deprecating sense of humor. If you track down Thompson's debut release, "Highway," on his web site, you are greeted by this: "This is my first album. Most people don't own it. Most people shouldn't." And he describes himself as "one of the many singing and songwriting waiters in lovely Davidson County" (Davidson County, Tennessee, that is – Nashville's home).
But he clearly has a serious side as well, as reflected on his new "26 Years," with this liner note setting the tone: "The songs contained herein deal with this period of life. They are real conversations with and about myself, folks I know and a young man I will never know. Writing and recording these songs allowed me to come to terms with the end of my childhood and the beginning of the rest of my life." Heavy sentiments, but the smartly crafted acoustic music – often sprightly, always catchy – that surrounds the stories provides mood-lightening balance.

CST's Take: It takes a courageous performer to swing the door wide open on a record, and it takes a skilled one to make you want to come inside to hum, sing, and dance along.

Country Standard Time: The first line of "26 Years" is "Forgive me, Mother, for I have sinned/Over and over and over again." And while the record can't be considered an end-to-end confession, you do seem to be getting a lot off your chest - an assumption backed up by comments in the liner notes. Can you talk about that aspect? And how cathartic was making this record for you?
Allen Thompson: Making "26 Years" was an extremely cathartic experience for me. When I was writing the songs that became "26 Years," my mother was dying. For as long as I had known her, she had suffered deeply from many physical and mental ailments. She died just two weeks before I moved from Virginia to Nashville. The experience forced me to come to terms with a lot of different aspects of my life. When I first went into the studio to make this record, I had no intention of releasing it. I thought it would be way too dark for a sophomore release and national debut. As the songs started to come together, I realized the album was not as dark as I had originally anticipated, a fact that made the catharsis that much stronger. It felt great to get all of the things I'd wanted to say to many people, including myself, on record. It felt even better to have the record be listenable.

CST: On a related note, do you find it easier to write a song or sing about things on your mind than it is to talk about them?
AT: I remember a few years ago, I wrote a song called Sick of Me, which is about a failing relationship, and both parties seeing the failure, but being powerless to stop it. I remember playing it for my wife, who was at the time my girlfriend, and seeing that she was visibly annoyed. She asked me why I wrote songs about such sad aspects of life. I told her, "I'd prefer to get these feelings out and sing about them than to keep them bottled inside. Usually by the first time I perform a song like this in public, I've solved my problem. Hopefully after that, I can help other people think about these situations and solve problems in their own lives." If I don't write about something that's on my mind, it usually stays there and bothers me for a long time. I like to talk, but I've found that people listen more closely to your problems with a good band playing a catchy chord progression behind you.

CST: I really like the image of a "handmade highwire." I'd never thought of the whole "you made your bed now lie in it" kind of thing in those terms. How did that image come about?
AT: That was one of those phrases that just sort of came into my head. I don't know if I read it somewhere or heard it or made it up myself. It's pretty good, so I imagine I at least subconsciously stole it from somewhere. I played with it for a while until I watched a couple of friends who were dating end their relationship in a very messy one-sided manner. I wrote the song for my friend to let him know his girlfriend leaving was probably for the best. Staying in a messy situation usually just tends to make it messier.

CST: The concept of time has a recurring role on the record, from the album title and the song titles 26:1 and All These Years to an overall feeling of time that's been lost (addressed specifically on Nothing at All). Please talk about that particular theme.
AT: During the time I was writing the album, I was reading a lot of books that related to the situations I was going through: Proust, Tennessee Williams, Joyce and Faulkner and biographies of artists I was influenced by who went through similar events regarding their family members. One theme that kept showing up in all of it was being ashamed of missing opportunities. Being severely debilitated by the ghosts of one's failures regardless of the scope of their successes. It's easy to look back on a situation and see how you could have made better decisions. It's really difficult to learn from those mistakes and missed opportunities and make better decisions in the future. I guess I was just trying to remind myself to learn from my mistakes and the mistakes of others and not waste any time in leading a better life.

CST: And with references to Blue Ridge, Shenandoah and Virginia, there's also a strong sense of place. How big a role does your surroundings (or ex-surroundings) play in your songwriting and music, and how big a role do you think environment plays in general in music?
AT: Environment plays a giant role in music and art in general. I grew up in a place that has a rich history. It's a beautiful place, but there's also a lot of darkness and weirdness there. I'm sure every hometown is like that. I haven't really travelled around until this year when I started really touring, so most of my experiences took place with the Roanoke, Shenandoah and New River Valleys as the backdrop. I wanted to paint a pretty clear picture of the environment in which I grew up. It's also got an important bluegrass and country music heritage. It seemed appropriate that a record this personal should reflect the environment where most of the album's events took place, both lyrically and musically.

CST: Can you talk about the significance of the numbers in the song title 26:1?
AT: The song is about Gram Parsons, who died when he was 26 years old, the same age I was when I was writing the songs for this album. I read the Ben Fong-Torres biography of Gram and learned that we both had parental figures die from suicide and alcoholism at similar points in our lives. I wrote the song more to remind myself that your life doesn't need to be defined by tragedy, but that you can learn from the mistakes of others and not make the same ones yourself. I wish Gram had been able to do that as he was a brilliant singer and was becoming a great writer at the time of his death.

CST: On the closer, Break Me in Two, you step aside and let Larissa Maestro sing lead vocals for the entire song. Why? I certainly didn't see that coming. And that might be a first in my experience, at least as far as the last song on a record is concerned.
AT: I originally thought the record was going to be a huge downer, my version of "Nebraska." I thought Break Me in Two with its tempo, chord progression, and tongue-in-cheek lyrics would be good comic relief for what I thought would be a real cry-into-your-whiskey glass kind of album. When the arrangements didn't turn out that way, the song still fit, but in a different context. I had thought about making it a hidden track on the album, but I really wanted people to not only hear it but also to know who the wonderful girl singing was.

CST: For lack of a better word, "26 Years" often has an "old-fashioned" feel: the instrumentation, the arrangements to a large degree, even the album's length (10 songs in 33 minutes - would have made a perfect 5-songs-to-a-side LP in 1977). But at the same time, it sounds fresh; there's nothing remotely mothball-y about the record. How much of a goal is it to strike that kind of balance? And how do you approach striking that balance?
AT: I always loved records like John Hartford's "Aeroplane," Van Morrison's "Astral Weeks" and "Red-Headed Stranger," as well as older stuff like Jimmie Rodgers, Lightnin' Hopkins and Hank Williams. The material on this album had the same feel as a lot of the songs on those records, so I thought it would be cool to make an acoustic album and really let that spirit out. That being said, I definitely made the effort to have the staff on the record be comprised of all young people just starting out in their careers in order to give it a youthful and new vibe as well. My favorite artists borrowed from the folk tradition and added things to it to create something new. I wanted to attempt to do the same.