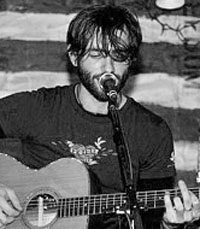 Bio: Born in New York City but moved, at a young age, to Nashville to grow up. Then moved to Knoxville to grow wings. Then moved back to Nashville to really spread 'em. That's how the abbreviated, and fanciful, bio of singer/songwriter/poet Matt Urmy might go, although he'll tell you that the "songwriter/poet" part of that description is redundant. Urmy has three independent releases - the third, "New Season Comin'," just out at the end of the summer, and he's had a book of poetry published. In his performances, he weaves spoken word poetry into his folk-country-blues style of singing and storytelling. And just to add another layer to the proceedings, it's worth noting that he studied with noted healer Hohepa "Papa Joe" Delamere. As Urmy likes to put it, he walks in the footsteps of many traditions.

CST's Take: Matt Urmy has one of those old souls that you read about and a big ol' humanist heart a la John Prine (or Prine's honorary godson Todd Snider), and he presents his songs in a semi-raw voice that ranges from hushed to hallelujah and gives extra depth to his messages.

Country Standard Time: Please talk about the differences between writing songs and poetry, as well as the overlap between the two disciplines. When you sit down to write something (if, in fact, that's how you go about it), what determines its fate?
Matt Urmy: One of my overarching credos as an artist is don't try to control it; just let it come. Then once it has arrived, I can begin the process of shaping it and playing around with it until it takes some kind of form. I do a lot of my composing on napkins and pieces of scrap paper. I find that to be a great way of keeping it organic and spontaneous, as opposed to sitting down with a nice white piece of paper in front of me and deciding it is time to write an inspired piece. I need to feel the sudden and subtle approach of the inspiration – the surprise. I have no idea what force in the universe is responsible for doling out inspiration, but it is not something I spend any time trying to control.
Usually, one of the determining factors is what is nearby when the inspiration hits. If my guitar or piano is in reach, cool. If not, well, I always have a pen in my pocket, and I can always write on my skin if I have to. That being said, over the years I developed some kind of second skin that can feel pretty quickly whether an inspiration is heading towards being what is traditionally called a poem or what is traditionally thought of as a song. I think a poem and a song are one in the same. Poetry exists within both. People who make poems have sort of claimed the word poetry as theirs. I think that's ridiculous, and part of the reason you rarely, if ever, hear anyone talking about the poetry they're reading. Poetry can exist in the way you walk down the street, and a poem can be devoid of any real poetry whatsoever! So, for me, the more the process of poetry and songwriting become indistinguishable, the better.

CST: New Year Mornin' and Easy Train are the two songs on "New Season Comin'" that made the biggest impressions early on. The former strikes me as kind of spoken word that just happens to be blessed with pedal steel, while I can easily imagine Van Morrison singing the latter. Please talk about the creation of each of those songs.
MU: I wrote New Year Mornin' in 2007 on January 1st. My little boy was only a few months old, and he was lookin' up at me from the bouncy seat, and I was pickin' my guitar and the song just showed up. Now, I toyed around with the lines and worked on the rhythm and word choice for a good while so it could flow, but the meat of the imagery and subject matter came quick and was really fun.
I honestly don't remember exactly when I wrote Easy Train. Sometime in late '07. It's a song about a need for transformation. It comes from one of the places we reach in our lives when we are no longer inhibited by shame over what's falling apart because we feel so certain that something new is being born. It's a bit vague, and a bit dark. But, it's a soulful place, a place where life renews itself. I was lucky with this one, and it didn't take long to write at all.

CST: I'm going to cite a couple of terms that have been used when describing you: troubadour and creative warrior spirit. What do those words mean to you, and how do you think they apply to you?
MU: Well, that's an interesting question. The word troubadour means a couple different things to me. But at the foundation of the word is a spirit, a perspective. Historically, it is of great significance to me: the troubadours were among the first poetry I ever really heard music in, and it has a special place in my heart. Today, that word is kind of watered down by a lot of folks to mean someone who travels around with a guitar. Language is like that. As a word travels its journey through time, the different ways in which it is used influence what kind of power that word has at any given moment. And we abuse so many words, don't we?
Anyway, my hope is that when, and if that word is ever associated with my name, it is done so to mean that I am in league with that spirit. The spirit that takes what it sees in the world outside, what it feels happening in the world inside, and synthesizes the two together into music and song, then electrifies it all with poetry. The creative warrior spirit. Hmmm.... Well that goes back to one of my favorite poets: Robert Bly. Bly talks about, in his series with Bill Moyers, the Warrior. He calls the Warrior the keeper of the boundaries. I love that! Because the Warrior becomes an essence that isn't just associated with brutality, or dominance; it is all about guarding something sacred. So to me, a Creative Warrior is one that works with the boundaries of the Arts. And I can feel my heart get to beating faster when I say that. That's just my game...

CST: How did your experience as a student of Hohepa "Papa Joe" Delamere affect your work as an artist? And if you don't mind, a few words about Hohepa Delamere would be appreciated as well.
MU: Papa Joe opened me up. Being able to study healing and life with him gave me new ability and understanding of how to use my body and other gifts, to sense the world. So with regard to my work as an artist, my abilities began to open up and blossom along with all the other parts of me. I was losing my inhibitions and fear, reaching for higher ideas, and beginning to connect with something that I still do not have a name for. Papa broke me down, then sat there and watched as I put myself back together, offering advice and love and laughter along the way. He was an elder of the Maori people. He passed away in 2006, only weeks after my son was born. He was an extremely humble man, with extremely extraordinary talents. Above all, he had as much love in his heart as anyone I've ever met. He refused to let anyone call him a guru; he did not give a damn about being famous for who he was. He only knew what his purpose in the world was, and from the time I met him, to the time he passed on, he walked that path. He was a healer. A beautiful man.

CST: On a somewhat similar note, how have your work and your work habits changed since your son was born?
MU: Everything changed when my son was born. One thing that has changed most since my son was born is the number of hours that I sleep. There was a tremendous decline in sleep after he was born, and it has remained that way ever since. While he's awake, I give him my full attention, so writing and thinking and reading all take place while he is napping and after he's gone to bed. I'm sure that shift has had a profound effect on how I process my inspiration, but I couldn't begin to tell you exactly how. I'm just thankful that my body is able to hold out and stay awake long enough for me to keep up with the flood of inspiration that moves through me.

CST: And to complete the influences/impact trifecta: what has been the impact on your music of living in Knoxville and now Nashville?
MU: Looking back, Knoxville was the place I went to learn how to be an artist. There is some real magic in Knoxville, and that happens to be where my road led me. I left Nashville to find the kind of music I wanted to write, and in the 10 years I spent in Knoxville, I found much more than that. I was 18 when I moved there, green as a pine tree. I had never been drunk. Never been in any real danger. I was a kid who loved to play guitar, that was raised in a very privileged environment. Knoxville became my home base for world exploration. From the alleys, graveyards, bars, and streets of Knoxville, to New Zealand, Europe, Mexico and Canada. It became my refuge and home. I was learning how to live for myself, and that is where my sense of artistry was really born. I stripped away many of my boundaries there, I met great musicians and storytellers like Casey Jones, and RB Morris. They led me into a musical world I was not aware of before coming to Knoxville. It was a decade of revelry and discovery that climaxed with the birth of my son, Ezra. It was then that the road bent around and pointed back to Nashville. My family was still there, and Ezra being born created a fire in me that I knew I could not tend to in Knoxville.
I came back to Nashville eager to see how the ways I'd grown and changed as an artist in Knoxville would be received. The large machine that exists here is something that always lingered in the back of my mind, and coming back was exciting, and I discovered very quickly that Nashville had changed a lot in 10 years. A whole new spirit was in the town, mixing with the longstanding traditions. It's hard to describe what I felt when I got back. But being back here now is all about bringing my music to the world's ear. Coming out of living just for myself, and trying to contribute to the larger dialog. I'm burning with a fire to use my music to inspire people, to find real ways to help people. We are living in exciting and challenging times, and I see a real need for Renaissance, on a global scale. So what better place to help start one up than the only town on the planet called Music City!