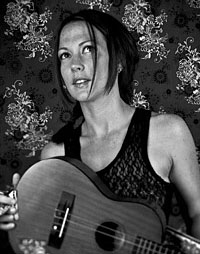 Home: "My current home would be a rental car; I haven't been anywhere for 14 straight days since April 3rd. Technically, my bills are at a PO box in Nashville. And my heart is in Lubbock, Texas."

Bio: When one's first instrument is a pawn-shop violin, a musical path might already be starting to unfold. First, the fact that it's a pawn-shop violin probably suggests that it will really turn out to be a fiddle (consult some country song lyrics) and your music career will swerve roots-ward. Such was the case for Amanda Shires, not yet 10 when she acquired that instrument. And her path's been a fascinating one. Playing with a kids western swing band led to her performing with the surviving members of Bob Wills' Texas Playboys. She went on to join the Lubbock, Texas-based alt.-country band the Thrift Store Cowboys, and she's worked with Texas heroes Billy Joe Shaver and Gary P. Nunn.
More recently, she toured Europe a couple of times with Nashville singer-songwriter Rod Picott, with whom she recorded the duets album "Sew Your Heart with Wires," released last fall. And still she found time to record and release "West Cross Timbers," her second album but her first singer/songwriter album. Her official debut was an instrumental record full of fiddle tunes. Or, if you prefer, pawn-shop violin tunes.

CST's Take: Even if, inexplicably, you don't like fiddle or ukulele, you'll stay for Amanda Shires' singing voice and songwriting voice.

Country Standard Time: When does a violin become a fiddle. And I suppose it works both ways: when does a fiddle become a violin?
Amanda Shires: A fiddle becomes a violin when you can't afford it. I just say that because I've had a lot of accidents with mine onstage. Even like two weeks ago I was playing, and it fell off where it was supposed to be.

CST:: Please talk about the different roles that you play in the music world - session player, duet partner, solo artist - and the pros and cons of each of those.
AS: There are a lot of pros to being a side person. You're told you're going to make this much. You have a place to stay. You're gonna get your per diem. You're playing music, which you probably like to do if you're in that line of work. The cons are the fact that you're dispensable. People can tell you, 'Um, we don't like the way you - well, anything really.' Maybe they just don't like fiddle anymore. They've decided the new cool, hip thing is Dobro, so you're dispensable. For duets or duos, the pros would be that you have a partner to share everything with, you know? You share in the glory, but you also have somebody to complain to. The cons would be - what are the cons to that? I don't know. We'll have to ask Brooks & Dunn. (laughs) 'What went wrong? Why are you breaking up?' They had an interview where they said they were never ever going to break up after they got their first Grammy or whatever. The pros to being a solo person would be, let's see, you get to do whatever you want whenever you want. Then you have the con, which is all of it lies on you. All the failure. Not all the success, really. But mostly all the failure falls on your shoulders. The success is you and your team. (laughs)

CST:: We are going to talk about "West Cross Timbers," of course, but I don't want to neglect "Sew Your Heart with Wires," the album you made with Rod Picott last year. For those who might not have discovered it, can you offer a description?
AS: "Sew Your Heart with Wires" is a record where Rod and I wrote all the material; it was all co-written. It's completely acoustic, and it was recorded live. Some songs we did 36 takes. Some songs we did 110 takes. Then 111, and it still sounded like we needed to do 112. Some of them we did in one take, you know. It's just real sparse. We did it because we found that we could write together. And we were touring so much together that people were saying 'why don't you guys make anything together?' Then this light bulb went off, and we said 'why don't we make anything together?' (laughs) So, we decided to start working on it, and it came out really good. It was a fun project, and I'm a huge fan of Rod's writing. I couldn't have asked for a better duo project than that.

CST:: Okay, think about the first song that you ever wrote and then think about the song that you wrote most recently. What are the songs, what do you remember most about each situation, and how has your writing approach changed?
AS: The first thing is that my age has changed. (laughs) I have more experiences. And the first song sounded a lot like Row, Row, Row Your Boat. Now I've read a lot and probably experienced, well I'd like to think, a lot more. My earlier stuff was way more naive.

CST:: Do you remember sitting down and writing that very first song?
AS: I do. Something about despair is just another stair my heart must dare to bear. (laughs and laughs some more) Isn't that awful?

CST:: Come on, you get points for rhyming, right?
AS: No!

CST:: There's a lot of variety on "West Cross Timbers." Upon Hearing Violins is just a great roots rock song, there are ballads, fiddle spotlight tunes, and I'm not sure how to classify I Kept Watch Like Doves. Was it a goal to showcase the different styles, or was it just that the group of songs ended up having different personalities?
AS: I think there's a progression, and I didn't sequence the song in the order that they were written. Styles are a little bit different because I was experimenting a little bit. I can remember each one and what was before it, and in my mind - which could be a crazy mind, I don't know - I can sort of see a line where I was trying something and then I end up somewhere. So it could sound like different personalities just for the sheer writing experimentation....I have some stuff that didn't make it on this CD. Probably won't make it on to the next one either, just because it doesn't fit really. It's more old-timey country. Those songs come out, but they don't really go with everything else. They're even more country than Keep Them Dogs from Barkin' or something like that.

CST:: I'm always interested in the sequencing of songs on records, and I found it interesting that the two songs that you didn't write ended up smack in the middle (Picott's Angels and Acrobats) and last (the '20s tune Whispering - two important slots.
AS: I think I did that semi-on purpose and semi-subconsciously. I knew that I wanted an upbeat song for the first song like Upon Hearing Violins. I'm still new to recording obviously, but I knew that's what I'd want to hear a kind of upbeat one. And I wanted to make sure that I showed I could sing my own songs. I kind of wanted to set it up so you know that I play the fiddle, you know that I play the ukulele, you know that I write my own songs, but I'm not opposed to covering a good song, or a great song. The last song, the Whispering song, is a tribute to all my Texas Playboys, who I still adore. I've lost two of them in the past year, and that part of me is something that's just never gonna leave. I mean, I hope to always be playing some sort of western swing.

CST:: You've played my adopted home region of Raleigh/Durham/Chapel Hill, N.C., a couple of times recently. What's something that you've discovered you like about the area?
AS: People are going to shoot me if I say this, but I'm going to say it: I like the pulled-pork barbecue better, and I'm from Texas. Something about that vinegar and the sauce. Let the fistfights begin.