Album: The Holy Open Secret
Song: What Good Are Plowshares If We Use Them Like Swords? 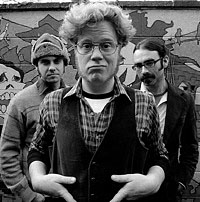 Great music from Hoots and Hellmouth

Album: The Holy Open Secret
Song: What Good Are Plowshares If We Use Them Like Swords?

Years the Band's Been Together: 4.2

Bio: When Sean Hoots and Andrew "Hellmouth" Gray started playing together in 2005, they soon realized that they could make as righteous a ruckus with two acoustic guitars as they'd been making in the lots-of-gear alt-rock bands in which both had been serving in the Philly area. In the years that followed, other members cycled in and out of the group, but the harmonizing threesome at the heart of the new "The Holy Open Secret" - that's Rob Berliner completing the trio by attacking strings and stomp boards with the same gusto as the cofounding pair that gives the group its name - gets things just right. In equal measure, you get bright big ideas and quiet little scenes, a country-soul revival meeting that's suitable for your living room. You could make the case that the H & H really stands for Hollered and Hushed.

CST's Take: CST has to admit that Hoots and Hellmouth themselves have said it best by stating that they represent "new music for old souls."

Country Standard Time: A lot of your songs look back, both stylistically and theme-wise. What's the appeal of looking to the past?
Sean Hoots: There's no real conscious effort to "look back" on either front, but we do seem to find ourselves being lumped in with the recent "revival" fad of traditional American styles of music. We love the old stuff, for sure, and we respect the tradition, but really we just wanna play honest music with honest lyrical themes that speak to our experience in the modern-day world. Perhaps the fact that we often feel out of step with said modern world causes us to approach our music in a fashion that seems outmoded or old-fashioned, but don't mistake that for nostalgia. We are very much a group for the present.

CST: On a similar note, stories and social messages seem to connect better with a listener, at least this listener, when presented in a musically stripped-down fashion. Why do you think that is? Or maybe you don't agree....
SH: The two main components of the kind of songs we play are lyrics and music. Any time one is diminished, the other is exalted. In general terms, stripping away electric instruments and drums from what is ostensibly a rock song certainly places a much finer point on the lyrics, as the words are more clearly heard and, thus, understood. However, I believe the music we make to be more complex than the listener might realize upon first exposure. We work hard to ensure that the intricate, interlocked rhythms coming from our instruments, voices, and stomp boards provide a suitable canvas for the lyrical articulation.

CST: On one more similar note: among the lines that jumped out at me on "The Holy Open Secret" is one from Family Band: "perhaps a little more domestic but no less passionate." I was thinking that those words could apply to preconceptions that some people have about rootsy and acoustic music. Just because there's not a lot of noise and bombast and over-the-top instrumentation doesn't mean that there's not a lot of passion and spirit. Quite the contrary. Thoughts?
SH The line is actually a reference to familial domesticity, but yes, I see what you're saying. Volume does not equal passion. Bombast does not equal soul. That discovery was basically the watershed that birthed this band. We were all involved in "rockin'" bands prior to this one. It's nice to be able to get the same cathartic release from music without having to haul around all that equipment.

CST: You have the reputation as an engaging and entertaining live band. What are some of the things you like best about being on stage? Any stories about winning over an initially reluctant or skeptical audience?
SH: The nature of this band allows us to play in front of so many different audiences. We'll play a polite listening room one night and a boozy bar the next - and we seem to connect with both extremes. Onstage, we are who we are: no posing, no rock-star antics. We just want to make a connection with people - through our music first, but also through other interactions, whether that's between-song banter on stage or at the merch table after the show or in the parking lot or wherever! And sometimes depending on our mood we'll play a show where we let the music do all the talking. We don't feel the need to always be engaging in the same ways at every show. We let the flow of the day take us more than anything, I guess. The stage is different every night, as is the crowd, so our approach changes with each environment.

CST: The instrumental break in the middle of Ne'er Do Well is one of the loveliest passages I've heard this year. And then you move on to What Good Are Plowshares If We Use Them Like Swords?, which is one of the most musically down and dirty songs on the record. Can you talk about that ability to move from pretty to gritty?
SH: That's the beauty of our dualistic songwriting approach. Ne'er Do Well is an Andrew song and, typical of his style, it is a more hushed, muted affair (although I actually contributed to the instrumental passage in the middle to which you refer). Plowshares is one of mine, so it has a bit more bombast and soul. That yin-yang is what made Andrew and I want to start writing and singing together in the first place. We love what each other does and can really feel it despite the seeming stylistic differences. I think the two approaches provide the perfect foils for one another. And really, bottom line, everyone in the band is wide open in our appreciation of all music. There's a thread of feeling and honesty that connects whatever music is "good" in the world. Feeling is not restricted to genre or cultural clique. We welcome it all.

CST: Okay, this is the silly fantasy question: you're organizing a mini-festival with you and four other bands/solo acts performing. What's the roster for the festival, where on the bill does Hoots and Hellmouth play, and where is this event held (and any appropriate why's)?
SH: Hmmm... I guess at this point in time, at this hour of the day, in this particular headspace, I'd put together this bill: Hezekiah Jones, mewithoutYou, Hoots and Hellmouth, Animal Collective, D'Angelo. Held in the field next to my family orchard in the mountains of North Carolina!


More info on Hoots and Hellmouth