Album: The Killer In Me
Song: Better 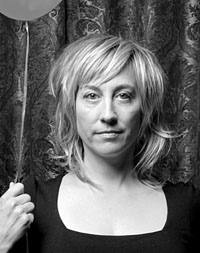 Bio: For Amy Speace, the road to what she refers to as "the singer-songwriter world" wasn't a direct route. Speace originally planned to be a playwright and an actress, and to that end, she toured with the National Shakespeare Co. After teaching herself to play guitar and discovering the unique joy that comes from writing songs, she traded in the stage (or, in the case of a non-traditional production of "Henry V," the parking lot) for, well, another stage.

For "The Killer in Me" – Speace's third release and second for NYC-based Wildflower Records – the road led to a cabin in the wilds of the Catskills. While dealing with the dissolution of her marriage, Speace created the songs for the album in that rural, isolated setting. It was songwriting as coping mechanism, if not exorcism, yielding moments of unfiltered emotion and raw poetry: "I have failed and I have fallen, cried till I was bawling," she sings on Haven't Learned a Thing. "Been down so low my face was on the tiles/Where the cold against my lips, hollow like your kiss/Was empty as a North Dakota mile." Her words connect. And, working again with a band driven by producer/guitarist James Mastro (Bongos/Health and Happiness Show), Speace makes sure her music connects as well, as it shifts naturally from gentle folk to rowdy-enough rock.

Country Standard Time: When you're preparing to write a song, and maybe you're having a little trouble getting started, are you more likely to look inward or out the window? Why?
Amy Speace: Inward. Actually, I have a couple different ways that I write, so this probably answers it better. If I'm trying to write a song that I know what the song is about, and I'm getting lost - and I have a little bit of writer's block, but I know what I'm trying to write about - I'll go inward because maybe I'm not touching on how I actually feel about something. So, I go straight to what it is that I actually feel, and I try to write how I feel pretty much just like I'd say it. Sometimes that leads me to a lyric rather than trying to be poetic and flowery about it. But if I don't know what I'm writing about and I'm just staring at a blank page trying to get an idea, one of the things I do is just pick up a newspaper and look at a title. So, then I look outward. If I'm totally stuck and have nothing to write about, rather than give up and walk away and claim writer's block, I'll take somebody else's idea and go from that.

CST: That question presumes that you set aside time solely for writing songs as opposed to songs just coming to you whenever they want. Which is more typical, and what type of writing process do you prefer? Well, obviously, you probably like it when they just come to you, but....
AS: Some do, some hit you over the head, and you can't ignore them. And sometimes you go through a whole dry spell of having no ideas that are kind of floating out there in the ether, so you have to get 'em. And I think the only way to get 'em when you're stuck that way is to have a discipline. I do write every morning, but I don't necessarily write songs. I write every single day and I'm pretty disciplined about it, but I don't force myself to sit and write songs. I just say for 20 minutes I'm going to write. I might do a writing exercise that gets me a little deeper into the metaphor of the song I'm currently working on, or maybe it's just some kind of stream-of-consciousness writing that just frees me up to see the world and grab an idea.

CST: I think the terms "folk rock" and "roots rock" can both apply to the music on "The Killer in Me" at various points. Do you even think about descriptors such as those, or do you leave the labeling and categorizing to the music writers?
AS: Yes, I let them do that. I actually don't like the whole genre/classification thing. Ones that are obvious, like whether it's classical music or polka or punk, that makes sense. The stuff that I like, that I listen to is the kind of stuff that rides the fence of a lot of different genres and pulls from a lot of different places. You can't ever shove it into one category. If somebody ever asks me what my music is like, I just say "listen to it, and you tell me."

CST: Which is more daunting - or, to go positive, more invigorating: bringing someone else's words to life as an actress or sharing your words with strangers as a singer/songwriter?
AS: More invigorating would be the second because that's what I chose. I stopped doing the acting thing once I discovered this singer-songwriter world because it just felt more natural. I just liked it a lot more. I love acting, and I love putting on the mask of another character. But I'm kind of a control freak, and I couldn't control the words. I was always at the hands of the director, at the hands of another playwright. I like being able to be all of it in one, and that's what's so nice about being a singer-songwriter. I run my own band. I'm my own little artistic ensemble.

CST: That damn Shakespeare. He's so inflexible.
AS: Yeah. (laughs) But if I were to say my favorite acting, it was the Shakespeare. If there's anybody's work you want to wrap your brain around as a different character, you can't go better than Shakespeare.

CST: I enjoyed reading about the evolution of the song Better in the press kit. Can you talk about that song's origin and the different forms it subsequently took?
AS: It's funny. I wrote that song as such a joke. I remember I was driving through Alabama on a tour, and the only music I could get on the radio was straight-up pop commercial country. I was listening to, I think, Shania Twain for the first time because I don't really listen to straight-up country that much. I was struck by how all of the songs had plays on words and were very, very hooky. I started writing that chorus while I was driving, just as a joke. "Let me see if I can write something like that." Then I took it to a friend of mine. She liked it, so she kind of came in on it. I played it a couple of times, and I just felt that it didn't fit me. It felt a little bit like, I don't know, a novelty song. But then I started playing it again, and my producer said "You know, if we slow it down and maybe make it a little sloppy and a little trashy, it could sound a little like The Faces or The Band." And I said, "Okay, let's try it." So, we kind of got a little drunk and played it. It could sound trite and treacly and too cutesy, and I didn't want it to sound like that. At the same time, I didn't want it to sound too much like a female anthem song. I didn't want it to be a straight-up country song. I wanted it to have something else to it.

CST: You acknowledge a number of people in the liner notes for "The Killer in Me," but I'd like to focus on three: James Mastro, Ian Hunter and Mary Gauthier. Please talk about the contributions and/or inspiration provided by each.
AS: James is one of my longest-time collaborators. He produced my last album as well. He's a guy who's had an incredible career, and he's been a real encourager to me, for my own voice. And I knew that I was going to do this record with him even before I started writing the record. He plays in my band, and he's somebody I go to with my new song ideas, and he adds to them. So he's sort of my main guy.
James plays guitar with Ian Hunter, and awhile back, he'd brought Ian to one of my gigs in New York. Somehow I got on the Ian Hunter Acoustic Tour in the UK last winter, and I toured with Ian's acoustic trio all through the UK. I just really got along with his whole band and him. Ian's whole crowd - you know, they're a rock and roll crowd - I was a little bit nervous that they were going to see me as some light folkie and not take me seriously. But Ian really had a respect for me, and we just had great conversations about music and rock and lyric writing. When I wrote The Killer in Me, I really wanted him to sing the duet on it, so we sent him the record. And he picked out I Met My Love and said "I like that song. I want to sing on that one too."
Mary Gauthier I've known for a while peripherally. If there's a food chain of the singer-songwriter world, she's, you know, 5 or 10 steps up above me. (laughs) She's like the senior, and I'm the kid in junior high. I was at the Rocky Mountain Folk Festival a couple years ago, and they have a songwriting school, and I was teaching. She was one of the Master Songwriting teachers. I got to know her a little better, and I sat in on one of her classes, which is really just her talking about her process of not only writing, but how she views her life in the business. She was saying it's really not worth it unless you're going to put it all out there. At the time, I knew I was going to be going through some rough patches. I had written some of the material for the record; I thought I was done writing. I was talking with Mary about kind of what I was going through, and she said, "Walk straight into it. Walk straight into it, and write it."

CST: Lastly, who gets the credit for the "What's So Funny About Speace, Love and Understanding" bumper sticker?
AS: David Giglio, the guy who wrote that in my high school yearbook. I always remembered that and always thought I wanted to make a bumper sticker out of that.