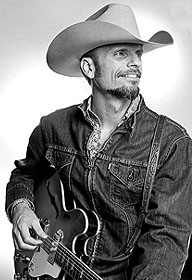 Bio: It's one of the more interesting music-world stories in recent memory. As chronicled in a Los Angeles Times cover feature late last year, Southern California-based country singer-songwriter David Serby finally met his biological father, Pete Canton, some 40 years after Serby's birth. Turned out that Canton is also a country musician; he's a bassist who played with Johnny Western (and thus toured with Johnny Cash when Western was part of the Man in Black's road show) and led Tex Williams' band for many years. "A strange coincidence, but a happy one for sure," says Serby. It also might go a long way toward explaining why Serby was always drawn to music despite his adoptive parents not being musically inclined. His birth father was part of L.A.'s country scene in the '60s and '70s, and now, 3 decades removed, Serby is a member in excellent standing of the city's latest roots/country community. And as evidenced by his third release, the fine new "Honkytonk and Vine," he writes and sings like a man with country music blood chugging through his veins.

CST's Take: David Serby's sounds great standing on the corner of Honkytonk and Vine, but he also has the talent to left-turn on to Tex-Mex and Country Soul.

Country Standard Time: How about telling us a little something about the roots/country scene in L.A.?
David Serby: I think it's a great scene. It's a scene that doesn't get a lot of attention outside of - well, it doesn't even really get a lot of attention in Los Angeles, sadly. But there's a lot of great writers here, somebody like Mike Stinson, who wrote Late, Great Golden State, which Dwight Yoakam put on a record a couple of years ago. He's out here and has been making great music for several years. A band like I See Hawks in L.A. There are just so many great bands out here playing roots music, and they kind of have the genre surrounded. Nobody's doing exactly the same thing, and everybody is really supportive of each other. There's a cool little scene out here, and I really happy to count all these guys and gals as friends of mine.

CST: For you, why country music? What's the appeal as a songwriter, as a musician, and as a band leader?
DS: You know, I think country music is just kind of what comes out of me when I write. But also, I love the conversational way that country music communicates. It's very plain-spoken. There's a beginning, there's a middle, and there's an end, for the most part. It deals with real emotions that people experience every single day of their lives in a relatable way. That's what I really love about country music.

CST: A local country musician offered up this quote recently: "Honky tonk is a musical language. It's not restrictive. There are many places you can go with it." I was wondering, seeing how the title of your new record is "Honkytonk and Vine," what your reaction is to that quote.
DS: I don't know that I disagree with that, but I think that one of the interesting things about genres is there are rules and people do kind of have pre-set expectations. And I think the challenge is to try to do something creative or unique within that structure. That's what I like about country music. It's not the blues, but it's like the blues. The blues is a structured kind of language, but not everybody's saying the same thing, and not everybody's playing the same thing. You get people doing really incredible and interesting things within that structure. I think honky tonk is the same way. There is a structure there, and people do have real expectations, but that doesn't mean you can't step outside of that and do something interesting with it. I do think it's a little more structured than being limitless.

CST: Country music songwriting, in addition to tending to be plain-spoken as you noted, is also known for its wordplay and twists of phrases and dual meanings. On your new record, For Crying Out Loud does that, Permanent Position and The Heartache Is on the Other Sleeve. I always think of Roger Miller's The Last Word in Lonesome Is Me as perhaps the height of that.
DS: That guy was a genius, a giant.

CST: I'll get back to the question in a second, but let's take a quick Roger Miller detour. One of the first albums I can remember being in the house when I was growing up was "Roger Miller's Greatest Hits."
DS: Did you grow up in the bedroom next to mine. (laughs) Same thing, that was one of my favorite records growing up. That was one of the records I could put, on and both my dad and I could tolerate listening to the same music for a change.

CST: Anyway, I was wondering if you would talk about that aspect of country songwriting.
DS: I was watching a "Crossroads" I think with Lyle Lovett and Bonnie Raitt, and they were talking about the blues and how the blues really is a feel-good music even though it's called "the blues." From the outside looking in, you'd think it was a depressing art form, but it's really about feeling better and feeling good. And if you look at country music like it's kind of blues music, the songs are sad stories, but you don't want to be miserable all the time. You want a smile on your face. And I think it's a way that country music has of injecting humor into misery. And it's one of my favorite things about country music. Whenever I'm out and about and I hear something that pops into my head, I think "that's a great twist. I need to figure out how to put that in a song." I was at the Cinema Bar one night with my buddy Todd, and we were talking, and I said, "So what do you do for a living, Todd?" And he was telling me, and I said, "Wouldn't it be great if we could get paid to hang out here and drink beer?" I went home and thought, "God, that's a country song." And that's how I came up with Permanent Position.

CST: I want to comment on this line, which I love: "I only smoke when I'm drinking/I only drink to forget." Where did that one come from?
DS: Even when I'm not playing, I spend a lot of time hanging out in bars, watching my friends play music. I used to smoke in bars with my friends, but I got in too many fights with my wife, before she was my wife, and I thought if I keep this up, I'll never get a wife. So I don't smoke. But two times in a week, someone asked to bum a cigarette off me in a bar and go outside and smoke, and I said "You know, I only smoke when I'm drinking." I thought that had to be some kind of sign that someone asked me twice, and I said it twice. Then I thought that someone had to have put that in a song already, so I Googled it and couldn't find it anywhere. Well, then, I've got a song. That's how that one came about.

CST: For your last question, I'm going to ask you to play DJ. You're putting together a three-song set, and Permanent Position is in the middle. What are you playing before it and after it?
DS: Okay. You're probably the only one who's ever asked that question of anyone. Let's see. Someone asked me the other day what I listen to, and I said I listen to my friends' records because everyone I know is a country musician here in town, and everyone has a record. And it's a great record, and you never hear it on the radio. The first song that popped into my head is one by Mike Stinson called Six-Pack of Lonely, and that's what I'd put as the first song. And I think (Dwight Yoakam's) Two Doors Down is what I'd close the set with. That's one of my favorites; it's a great song.