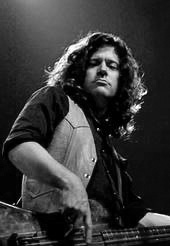 Bio: Ted Russell Kamp has many identities in the world of music. His session work and his main gig as the bass player in Shooter Jennings' band the .357's keep him the busiest. But Kamp is also a producer, a solo artist, a band leader, a multi-instrumentalist and a collaborator. But talk to him for even a few minutes, and you realize that the role of music fan also clearly belongs on that list. You hear him talk about playing trumpet in the high school band and then taking up the bass just as he was discovering R.E.M. and Husker Du and Fishbone in the mid '80s. He recalls taking the train in from his Westchester County, N.Y., home to see Elton John and Roger Waters at Madison Square Garden, and he recounts getting his start playing professionally in upstate New York before heading to L.A. to work as a self-described "freelancer" in the music biz. And when he talks about his own songs, he speaks in music fan-ese, describing Let the Rain Fall Down as "Stax-inspired," and he describes how Just Go South is a nod to Leon Russell: "It's got Russell's style of songwriting. You've got that loose, Jim Keltner-y drumming, the gospel chicks, the guitar leads, a lot of piano. And it has kind of the outlaw groove but a little funkier." All that, plus references to Arthur Alexander, Tony Joe White, Jessi Colter, Sam & Dave. On his new "Poor Man's Paradise," Kamp brings everything together - the experiences, the travels, the influences, the record collection - for an album that takes pride in blending and blurring styles.

CST's Take: Top-notch singer/songwriter skills catches up with roots music as it wanders from the West Coast to Memphis and New Orleans and Nashville and...

Country Standard Time: The list of names in the liner notes and the "endless hotel rooms" comment suggest that "Poor Man's Paradise" came together over a long stretch of time. Can you share the details of its creation?
Ted Russell Kamp: The recording was spread out over about a year. Basically, I go to Nashville and write a bunch of songs, and I also write a lot on my own. Every time I get a batch of five or six more songs, I get my buddies back together in L.A., and we'll do a new session, which will be a day or two. Then, I'll do a lot of the overdubbing on the road. Actually, one of the ideas for this record was I was getting a little tired of guitar-based rock and roll. Partially, I think, because I was touring heavily with Shooter that whole year. Also, a lot of the Americana bands - I mean, I love 'em - but I OD'd on Telecasters and strummy acoustic guitars. So, 9 of the 11 songs on the record, the basic tracks had no guitar. The basic tracks were keyboard, bass and drums, and in some cases, keyboard, pedal steel, bass and drums. A lot of the guitar parts are very simple, very sparse, a simple melodic thing; there's not a lot of strumming going on....The horns, the accordions, the mandolins, and a lot of that stuff I will do on the road. I have a little mobile laptop recoding rig. I'll set up in a hotel room on a day off with Shooter. Sometimes I'll wake up early, hang out in the hotel room from 11 to 4 recording, and then meet up with the guys at sound check.

CST: "Poor Man's Paradise" has a 1970s feel to it. A couple of the songs have a '70s country-rock sound, but it's more the variety on the record, which reminds me of listening to the radio in the '70s when there weren't strict radio formats.
TRK: I miss that too. I was born in '71, so I wasn't really an educated listener at that time. But a lot of the formats in modern radio and the way a lot of groups get divided by genre, I've never been a big fan of that. I've always been a big fan of many different kinds of music. I guess I've been a professional musician for about 15 years, and I've kind of jumped from genre to genre and been inspired by different people and different sounds and different eras as well. And I want that to come out in my music. I want to make an eclectic record that you can listen to from beginning to end. It always frustrates me when I'm all excited about getting a new album, or there's a new band, and once you've heard the first three songs, you've heard the whole record.

CST: If you had to make a three-song sampler of "Poor Man's Paradise" to get the word out, which three songs would you choose and why?
TRK: I think I would put Let Love Do the Rest on there. That's a really wonderful marriage of kind of a folk ballad, but it's also a soul tune. Of all the songs I've written, I think that's one of my favorites, and I'm proud of how the song itself came together and then how the recording came together. And it has a moody quality that I want to get at. Another one that I love is Old Folks Blues, which has more of a New Orleans-y energy to it. There's a lot of lyrics, and a lot of them have a witty quality that I really like, like the lighter side of Townes Van Zandt and some of those other Texas writers as well as John Prine. And then it has the horns and the banjos, and I tried to make it a bit of an homage to The Band. For the third one, I'll say Player Piano, which is the last song on the record, a waltz. You've got to either end a record with a big rocker or end it on kind of a dessert track to ease you out into the next phase of the day. I love waltzes, and I think that every set of live music or every record needs a waltz on it.

CST: You play a variety of roles in the music world: band member, band leader, solo artist, session player, producer. Do you have a favorite role?
TRK: I don't know; that's a hard one. I really like doing them all. And I love the different places I go mentally to do them all. And it keeps them all fresh. Like this last week, I was in Nashville just writing, just focusing on songwriting and the interpersonal chemistry that it takes. And then after five straight days of co-writing with different people, I had this cool little bar gig in Chattanooga, and it was just so great to let my hair down and just play again....It's the very in-the-moment satisfaction that you get from playing music. Sometimes you want the melody to be exactly like you recorded it because you really did craft a good one. And sometimes it's like, okay, the drummer dropped out by accident, so I guess this is going to be that broken-down verse. What can I do now to make it work? And I love producing. One of the things I like the most about making my own records is that after the basics are down, getting to arrange the rest of it. And then deciding whether I want to bring in someone I've been a fan of, like I've done some session with Don Heffington, and I've done some sessions with Kenny Vaughan. These truly great heavies.

CST: How about band leader vs. band member?
TRK: I've probably done around 30 or 40 shows in the last three months to promote the new record. I went to Europe for 3 weeks, and I've done maybe 15 shows in the U.S. too. I love it because I'm really starting to get back in my game as a lead singer and a frontman, and I'm really enjoying that. But there's just a whole lot of stuff that goes along with being your own tour manager and organizing and booking all the tours and making sure the press is coming together and visiting radio stations. It's a lot of stuff. So I'm kind of looking forward to the next phase when I can hop on the bus with Shooter and not worry about it. Just show up and play bass, you know.