Album: Leap of Faith
Song: Can't Come With You 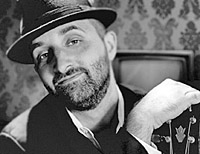 Bio: Seth Walker is a big fan of both Ray Charles and Willie Nelson. And just as Charles could hold court with a country & western or pop song when he wasn't perfecting rhythm & blues and Nelson delights in moving in whatever circles he puts a mind to, Walker likes to mix it up. It wasn't always that way for the North Carolina-raised, Austin-based Walker. He started out heavily invested in the blues, and his first records ('98's "When It Rains It Pours" and 2000's "Meet Me in the Middle," both credited to the Seth Walker Band) carried, in his words, "a jump blues old-school vibe." Walker's new "Leap of Faith" is his sixth, and easily most varied release to date. “Leap of Faith” continues to showcase his inventive guitar playing and soulful pipes, but it covers a lot more ground musically, from gospel to throwback Brill Building pop. And the presence of veteran Gary Nicholson as producer and a co-writer on two-thirds of the tunes doesn't hurt one bit either. Walker and "Leap of Faith" are genuine head-turners, as shown by quotes from kindred spirits Delbert McClinton ("The first time I heard Seth Walker at a small club in Nashville I was impressed like I haven't been impressed in 30 years, with performance, presence, and great songs.") and Marcia Ball ("Seth Walker swings, rocks, boogies and plays low down blues all in one set, all on one record.").

CST's Take: If you subscribe to the Big Tent theory of Americana, then Seth Walker - with his blend of blues, gospel, pop, R&B, rock, and a dash country - just might be your poster boy.

Country Standard Time: Can you talk a bit about how having two classically trained musicians as parents and how playing the cello at a young age helped shape where you've ended up musically?
Seth Walker: Having parents as teachers definitely shaped my ear, sensibility, and feel for music. My parents never forced this down my throat though. It was just what we did. My fingers have always been on a string of some sort. I can't say there weren't times where I'd rather be doing anything else other than practicing, but for the most part my parents were a huge positive influence on me in every way, as both teachers and parents.

CST: On a similar note, how has your time in the All-American music city of Austin, almost a decade and a half now, helped shape where you are today musically?
SW: Austin has sharpened me in many ways. There is a high bar here, and if you don't get it together, another badass is going to take your gig! During my time in Austin, I have met so many great musicians and band leaders who have encouraged and inspired my efforts. And stylistically speaking, the wealth of blues, Americana, and country artists have definitely shaped and inspired my style.

CST: Those arriving late might be surprised to learn that this is your sixth album. What are the biggest changes for you - both music-wise and approach-wise - from, say, albums one and two to “Leap of Faith”?
SW: The first albums had a jump blues old-school vibe, an idiom I had a comfort with, and these albums were just my first steps at writing, singing and recording. I was, however, surrounded by veterans during those sessions, and a schooling was dished to me for sure. Skipping ahead to the new album, “Leap Of Faith,” many more songs have been written, many more gigs have been played, and a few years of life lessons have woven into this new album. Learning the craft of songwriting is an endless endeavor, but I have had the pleasure of being catapulted to work with a giant when it comes to songwriting, Gary Nicholson, on this album. He has ramped the whole game up, and I am forever grateful for his direction, friendship, and belief. He is as good as it gets.

CST: You co-wrote a bunch of the songs on “Leap of Faith” with Gary, a name that folks should recognize for his great work with Chris Knight and Delbert McClinton among many others. Do you two have a standard approach to how you write together, or is it a flexible process? What do you think of co-writing in general?
SW: With Gary and I, it is very natural because we both have a blues sensibility paired with a mutual appreciation for a great song. But his soulful expression and experience of writing brought the songs to a whole new level. I also actually like the guy, which is also an integral part in the process. You gotta have the right vibe to collaborate. For a good chunk of the tunes, I would bring in an idea and concept for the melody and he would help me shape it and put legs on it. But some of the tunes were his babies that I helped him shape. In the past, I have done some collaborating with Mark Hays. I seem to take to it well. I like bouncing the ideas around.

CST: Horns on a record can often serve as the secret ingredient that takes the music to a whole other level; I think that certainly applies to the horn visitations on “Leap of Faith.” How hard is it from both a writing standpoint and a recording standpoint to work with horns? And talk about the payoffs, please.
SW: Horns are a nice addition to depth and melody in my music. The songs are not based around horns, so it wasn't a stretch from a writing standpoint. Some of the horn melodies just kind of showed themselves as we were tracking, and some of them were in my head at the birth of the song. Finding the right horn players to swing and feel it the same way I do is another story. We found those guys on this record.

CST: For years now, Please Send Me Someone to Love has been the go-to Percy Mayfield song for artists to cover. What attracted you to Memory Pain. And can you share some thoughts on Percy Mayfield for those who might not be familiar with him?
SW: I have always loved Percy. He is the poet of the blues. His lyrics are second to none. His jazz has always attracted me too. Ray Charles is playing piano on the track we drew our version from. I immediately loved the pocket and the feeling of it. We decided it'd be cool to cut it so we did.

CST: You also cover a song, Lately I've Let Things Slide, by one of my musical heroes, Nick Lowe. This is a recent song from Lowe's catalog - are you a fan of all his stuff over the years, or do you have a clear preference for the pop crooner work on his last three records? What led you to this particular cut?
SW: I was first introduced to Nick Lowe with “Party of One” and with the tune What's Shaking on the Hill that featured Ray Brown on bass. I fell in love with the tune and actually performed the song regularly in my set. Then I bought every album he did and quickly became an official Nick Lowe head. He encompasses all things and styles that I love in music in one damn soulful and clever package. One-stop shopping, Nick Lowe. After hearing this cut, the images he wrote in this song burned a hole in me. I was instantly taken by it, and it seemed to fit my singing too. I love this track.

CST: There's so much at play in your sound – from blues and gospel to R&B and a bit of country - that it's nearly impossible to describe, at least not neatly in a couple of words. Of course, that won't stop us from asking.... Can you describe your work in five words?
SW: That's the toughest question of the bunch. I would say American music. It all stems from the roots of music in this country. Americana, soul, blues, gospel, it all fits as a description of what I do. For me, the goal is to always make soulful music no matter what the genre or style.