Album: The Spirit, The Water, and the Blood
Song: Sing Like Mary Sang 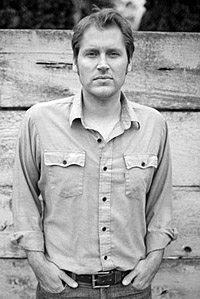 Current Home: Nipomo, Cal. (about halfway between L.A. and San Francisco on the coast)

Musical Influences: "John Barnett, number one. Bob Dylan, Buddy Miller and Chris Lizotte would be in there too. And there's a guy named Brian Houston out of Ireland who's really a really great folk singer/worship leader."

Artist Bio: It's dangerous to make assumptions based on a half-dozen swapped questions and answers, but it sure feels like the two roles that are most important in the life of Ryan Delmore are family man and worship leader. Musician is down the list a bit, but by choice and not due to lack of ability. Delmore lives with his wife of 14 years and their 4 kids on California's central coast near where he grew up, and spreading a spiritual message is clearly a priority for him. Putting things in that context makes his "The Spirit, the Water, and the Blood" even more impressive: he's clearly maintaining the balance that he's looking for in life while still making music that's satisfying on several levels. Delmore's quick to praise all those who worked on the record, a group that ranges from his churchmate "Skinny Larry" Schubert on pedal steel, triple-threat guy (drums, album art and backing vocals) Mark Folkrod, and former Black Crowes guitarist Marc Ford to producer Chris Lizotte and all the gospel-voiced harmony singers that took the glory songs even higher. His words, by all accounts, are as heartfelt as his music.

Country Standard Time: Can you tell me some of your earliest musical memories and maybe how those experiences contributed to you becoming a musician and a worship leader?
Ryan Delmore: Well I've always loved music. My mom had a pretty cool record collection with lots of old ‘60s and ‘70s records that I grew up listening to. When I was 12, I started going to a Monday night Bible study for surfers and skaters and all these young kids. We all met at this couple named P.J. and Monica Wall's house, and they would just cook us hamburgers and hot dogs. There was a girl named Kelly Miles who would just gently fingerpick her acoustic guitar, and we'd sing a few songs. They were all really simple, but that's when I fell in love with worship, when I heard it in that setting. I always loved music, but that was like my introduction into music for God and about God, and that's just all when it came together. When I was 16, I finally picked up a guitar myself, and from day one, I was trying to write songs for God. I think that a big part of the journey was that Monday night Bible study. That fueled the fire for down-to-earth acoustic worship songs.

CST: You have a spiritual message in your songs, but they're not preachy or heavy-handed. Is that something you do intentionally, and if so, is it hard to strike that balance?
RD: Yeah, the preaching at people aspect just isn't really a part of it for me. Sometimes I'll get a song idea that will be sort of an encouraging thing, but it's always to myself first. Like, "Help the poor, Ryan." If it turns into a song for other people, then hopefully that's how they take it, not, you know, you need to do this or that. That's not my thing. It's always about giving my heart to God or singing the gospel. It always starts for me first, and if it ends up being sung in a public setting then people can take what they want from it, and then it becomes something to them. I never intentionally try and tell people what to do or how to live. It always starts from your own personal journey, I think.

CST: There's a pleasing musical balance in your work. It's a nice mix of country, gospel, rock and soul. In that, what were your musical goals, as opposed to writing goals, when you were working on this album?
RD: Yeah, it just worked out for this album that we had a mix in styles. Some of the songs are eight, nine years old and some were written just before we started recording the record. There's a little bit of slight gospel feel here and there, and a little bit of soul and country. When you write songs at different times in your life, you may be influenced by the different things you're listening to, which is the benefit of doing your first real record with 10 or 11 songs. I had all of these songs I had been sitting on, so I mixed and matched and did a little hodgepodge of all the different styles of music that I have written over the years. They're not all completely different, but they're also not all straight country or rock. It wasn't intentional; it just sort of worked out that way.

CST: Now, you have a large family and just like everyone else, you work. Do you have trouble finding time to address your musical side in day-to-day life? If so, how do you make time for you music?
RD: I usually just kick Katie, my daughter, out of her room and go in there. (Laughs). That’s actually where I am right now. I’ll just play my guitar in here while she's out in another room doing her schoolwork or something. You do have to be focused with it. I try to find at least a little time every day to sit down with a guitar. Or, you know, get together with some friends, have them over for dinner, even if it’s just two or three of us. Then after dinner, we just sit around and play and sing songs. You do have to be intentional about it with all the rugrats running around, but it seems to work out. It's a blessing.

CST: Your CD is enhanced and includes chord charts and lyric sheets for each of the songs. Can you share why it's important that they were included on your album as extras for people?
RD: Yeah, it was really cool that Vineyard Music did that. I was really happy to hear it. I know that whenever I get a new CD and there are songs on there that I would love to play, it just always makes it so much easier to have immediate access to the songs, like you can know right then what chords they are. There's been a ton of records that I've gotten where they've had the songs, but there may be something just a little tricky about it, and then I end up never learning the song. With this it's really cool, because if you play music in church or you just want to learn it for yourself, then you can just plug it in and print up the chords right then. I just think that's a great tool.

CST: Marc Ford, who plays on your record, has produced Ryan Bingham. Has anyone ever confused you with Ryan Bingham?
RD: No. Ryan Bingham’s a lot cooler. (Laughs) For real! You can write that.