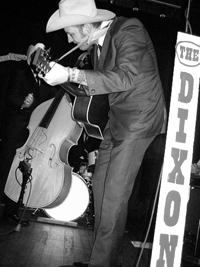 Great music from The Dixons

Artist Bio: Not quite four years ago, New York City transplant Jeff Mowrer was hitting his buddy Daniel hard with woeful tales. The chief lament of Mowrer, a native of salt-of-the-earth Greencastle, Ind. involved how hard it was to form a country band in NYC. Daniel mentioned a friend, Joey Covington, who played upright bass. Mowrer and Covington met, and the rest is history. Or at least it sounds like history: 1963 in a small-town honky-tonk on a payday Friday night, to be exact.

So, this story anyway has a happy ending, one that finds Mowrer and Covington surrounded by Telecaster slinger Chris Hartway, drummer Brother Paul Greenhaw and pedal steel player Gerald Menke in a band called The Dixons. (And Daniel's the band's manager - happy endings all around.) Good thing because there are no happy endings to be found in Mowrer's songs on the band's exceptionally fine debut "Still Your Fool." His titles say it all: Lonesome Side of Me, Barely Hangin' On, Broken Hearted, Lovesick and Blue.

Country Standard Time: Do you have a long-term relationship with country music or is it something you've come to more recently?
Jeff Mowrer: I pretty much grew up with my grandfather. He had a woodshop, and every time he walked into the shop and turned on the light, he had a country radio station turned on. He had it rigged so the radio would turn on with the lights, and it was on a classic country music station. So, I grew up around country music; it's all my grandfather listened to.

CST: Your songs, right down to their titles, have that classic country feel. Hearts aching and breaking all over the place. Is it a given that when you sit down to write a song, someone's gonna get hurt?

JM: (laughs) To tell you the truth, I don't think I've ever written a song that's uplifting. I like to take a song with sad lyrics and give it an upbeat tempo, but that's about it. I really don't write songs about anything good happening.

CST: I'm always curious about the ordering of songs on a record. On "Still Your Fool," you have the opening run of songs you did write, and then about two-thirds of the way in, there are the three songs that you didn't write. What was the thought process behind that sequencing?

JM: That's pretty much how I originally had it mapped out in my head. There were a couple of songs that we kind of slid around - that was between Bill, the owner of Cow Island (Music), and I and the guy in the mastering studio - but that was about it. We just wanted to lead off the record with a couple powerful tunes, especially the title track. I wanted to put that right up there in front. And then slow it down with a couple of the slower songs, throw the covers in there, and then hit them with a couple more originals on the way out. It's something I was thinking about during recording, how the energy was dispersed throughout the album, if you know what I mean.

CST: Speaking of those covers, you do Thanks a Lot, which I think can be considered a country standard, I've Got a New Heartache written by the prolific but not that well-known Wayne Walker, and a song from a rather obscure rockabilly/hillbilly band, Eric Kinsey & the Tip-Top Daddies. How did you decide on those three?

JM: Well, that's one of my buddies (Eric Kinsey) from Indiana. I grew up with him in the Bloomington scene; there's a big rockabilly scene in Bloomington, Ind. I called him up a couple years ago and asked "Would you mind if I recorded one of your songs? You were a big influence on me when I was younger." He was like, "Yeah, I'm flattered." So I picked that one (Just Say You'll Be Mine) off his CD to re-record. I chose I've Got a New Heartache just because I've been such a huge Ray Price fan for as long as I can remember, and I've always loved his cut of that tune. And Thanks a Lot, we started out playing it, and I threw in the major to minor chord and the break in there, kind of made it real moody. We never planned on recording it, but we had such a great response to that song. Every single show where we played it, people came up and said that it was a favorite.

CST: You'd think folks would be over this, but do you run into people who are surprised to discover a country band out of New York City?

JM: All the time, all the time. Yeah, people are always shocked. We just sent Deke Dickerson a CD a couple weeks ago. He was blown away. He was like, '"wow, and coming from New York. That's pretty wild." Yep, we get it all the time. But all the guys in the band, their roots are from elsewhere. Nobody's a true New Yorker. The steel player's from Ohio. Joey's from Arizona. Just all over the board.

CST: Do you think geography has anything to do with music - specifically, the kind of music you make?

JM: I don't think so, man. Honestly I don't, just because I've been so passionate about this music for years. It's all about what's in your heart, not about where you're at.