Album: Nature of the Blues
Song: Shout Out Loud 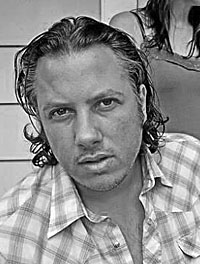 Current home: Austin, as close to San Antonio as possible

Artist Bio: Big guy, big plans, big record collection, big talent - that's an apt summation of Eric Hisaw. Now five full-length releases into his recording career, the strapping, dream-driven Hisaw did some wandering before (relatively speaking) settling down. He was born in Las Cruces, N.M., but he'd rear-viewed his hometown by his late teens, spending time in Louisiana and Nashville before landing in Austin. His music, too intelligent to be rough-hewn and too real to be over-polished, is equally inspired by the heroes who wander through his extensive LP collection (including a few he's gotten to know) and the blue- and no-collar heroes who've always shared his orbit. In Austin, Hisaw has become a true multiple threat, earning a name as a producer and an in-demand guitar slinger when he's not singing and songwriting.

Country Standard Time: In a recent review of "Nature of the Blues," the writer commented on how much he liked your take on the blues. I never thought of your music as being "the blues," but I guess it is one of many components. What's your answer when someone who just found out that you're a musician inevitably asks, "What do you sound like?"
Eric Hisaw: I wish it was easy to answer that question like it is for Roger Wallace or James Hand. I think of what we do as being rock 'n' roll like Creedence, The Band and the Stones. But, of course, to some people Limp Bizkit is rock 'n 'roll, so I have to throw in "roots-rock" (what's that? like reggae?) or "country rock" (like the Eagles??). Luckily in Texas, there are a lot of people who grew up on Joe Ely and Doug Sahm and understand you can mix blues, country, rock, soul, conjunto and whatever together.

CST: Your music sounds like the work of someone who is a big music fan himself and who has a lot of records. Is that accurate? How much does music - yours and other people's - dominate your life?
EH: I'm a music fanatic. I listen to lot of different stuff and have as Jeff Smith (of Saustex Records) calls it "the vinyl disease." Records are the only thing I really collect or consume. I'm not interested in resale value or any of that; I buy records to listen to and play along with. Music is the driving force around here as my longtime girlfriend Chrissy Flatt is also a singer/songwriter. I work a part-time delivery job for a wine distributor, but I make most of my living playing music, so it is a full-time thing.

CST: To follow up on that, I'm thinking that not all of those records are by Texas singer-songwriter types and country and country-rock artists. I hear echoes of Springsteen as well as Tom Petty and Graham Parker. Can you comment on that? And do you have any musical influences that might surprise people?
EH: I do really dig Tom Petty and Graham Parker a lot. I haven't ever been a real Springsteen fan although I am an admirer, and I do have all his albums that originally came out on vinyl. Maybe people would be surprised that I've always been into Lou Reed, Mott the Hoople, MC5, New York Dolls, Stooges, Patti Smith, etc. But it is probably obvious that I've been really influenced by Alejandro Escovedo - who used to sell me records in the early '90s at Waterloo - so there's a link there. I was a teenager in the '80s living in a semi-rural environment, so the music of the Long Ryders, Jason and the Scorchers, Georgia Satellites, Del Fuegos, Cruzados, The Blasters, Los Lobos, etc. really had an impact on me.

CST: You grew up in New Mexico, lived in a Louisiana for a bit and these days you're in Austin, Texzs. How much have those spots influenced your songwriting and your music?
EH: I've listened to a lot of Louisiana music, especially swamp pop and rhythm and blues, but living down there was more part of my Kerouac/Bukowski traveling bum phase than a musical experience. New Mexico has influenced me greatly because I can see things in ordinary people's lives there that to me are poetic and work in songs. It's where I was when I was at an impressionable age, which means a lot. There are also some good sounds that go with the desert and the mountains. I'm really influenced by Chicano and Indian culture from New Mexico. I don't know how influenced I've been by Austin. Some of my musical heroes worked from here, as I've been inclined to do, but their greater inspiration was from Lubbock or San Antonio or California. Sometimes to me Austin is a necessary evil, a place where artists have congregated to make a good work community but really kind of a candy-ass college town with overgrown students still kind of living in make believe land. I came here when the culture that created the myth of the city was just beginning to be overtaken by what it is now, so I saw a little bit of the legendary Austin at the Hole In the Wall, Chicago House, Black Cat Lounge, and Liberty Lunch, but I was too young and shy to be a part of it.

CST: We just profiled R.G. Stark, with whom you've played (among quite a few others), and well-traveled folks like Ponty Bone and Scrappy Jud Newcomb are on "Nature of the Blues." Can you talk about the community of musicians that exists in Austin, and what it's like to be a part of that?
EH: To add to and contradict what I said in the last question... Austin is an incredible place for really talented and well-versed musicians. R.G. is a fantastic songwriter and singer and just a creative powerhouse. I'm really lucky to be able to play with him. Since we've both released albums this year, I haven't got to play with him as much, but hopefully we still have some work to do together. I'm really selective about "guest" musicians on albums especially when we get a good group working together, but Jud Newcomb is one of those guys who not only can do a lot of things with a guitar that I can't, but also always knows exactly where I'm coming from. He is a really tasteful and sensitive musician. Ponty is a very cool dude who creates an exciting vibe around him. One of the songs on the record, Jake is a tribute to one of my idols Jesse "Guitar" Taylor, who Ponty put in a lot of hard and glorious miles with. Writing a song about Jesse, no matter how abstract, was a delicate situation, and I really needed Ponty's vibe on there to make it complete. Relationships like I have with those three guys are the great part of Austin. The down side is that when everyone plays with everyone, it's really hard to move forward with a sound. The "gig whoring" gets a little out of control, and I've certainly been guilty of it myself.

CST: Along those same lines, Ron Flynt - someone I've been following since his power-pop days in 20/20 - mixed and recorded "Nature of the Blues" and plays bass and keyboards on it, and he's in your band. Can you talk about what someone with his experience can bring to a record and to the stage?
EH: It's funny that I've become so close with Ron because 20/20 and those type bands weren't a big part of my background. Ron and I have a lot of common ground because my dad's folks came from Oklahoma, and I'm really drawn to the music (and way of life that created it) up there. Ron is the most complete musician I've ever met. His skill level and mastery of communicating musical ideas is a great resource that has meant a lot to several songwriters. Ron, Scrappy Jud and a great drummer named Dana Myzer really helped me see the value of getting my skills together and how to do that without sacrificing soul. I'd say Ron's most valuable on the floor cutting rhythm tracks using his bass to direct the band. We don't always have the same instincts in fleshing out and arranging tracks, but we usually keep up a really high level of enthusiasm when we're working. Ron hardly ever plays live gigs with me, though it's always cool when he can. Right now, a friend of Ron's son is playing bass with us live, so we have band members of all ages.

CST: Reviews have occasionally mentioned that you're a big, strapping guy (in one review, you attributed it to "pushing cars"). Has that fact ever helped you in the music world? Has it ever hurt you?
EH: I don't think being a big guy has helped me in any way. It may hurt, as I've been told I didn't look like a musician and should be playing football. I think when I drank, and I was a problem drinker, my size and look definitely hurt me in the music world because I easily could come off threatening. It's funny that I've always related to other big guys who played (Jesse Taylor, Eddy Shaver, David Hidalgo). I was just on the radio yesterday on the Native American show talking about the great guitar player Jesse Ed Davis, and I was saying how when I saw the Rolling Stones Rock 'n' Roll Circus I was so drawn to Taj Mahal and Jesse Ed because they looked like guys who lived like I did. As much as you may love Keith or John Lennon, they don't look like guys who'd cut the branches in their grandma's yard or help some dude push his car or whatever. Maybe it's a size thing, so in that way I have been influenced by being bigger. Probably more so, I've been influenced by coming from a working class background.