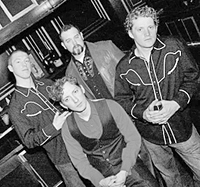 Girls Guns and Glory Bio: You rarely find lighthouses and honky-tonks in the same neighborhood. But when former high school band mates Ward Hayden and bassist Bruce Bagley reunited in the picturesque Boston-area town of Scituate in late 2005 to record a batch of songwriter Hayden's tunes, the results leaned decidedly country- and roots-ward. Those sessions led to Girls Guns and Glory's debut "Fireworks and Alcohol," followed soon after by "Pretty Little Wrecking Ball," a strong sophomore effort that helped earn the band a 2007 Boston Music Award for Best Americana Act. "Inverted Valentine," the latest release from the four-piece (lead guitarist Colt Thompson and drummer John Graham join Hayden and Bagley), is, among many other things, the sound of more awards being won.

Their music isn't pure country - the members' background in jazz ensembles, marching bands, and noise-rock outfits pretty much guarantee that it won't be pure anything - but it's a winning hybrid that could serve as a handy definition of Americana and its most county-rocking.

CST's Take: Girls Guns and Glory have big-name heroes, and they honor them with Roy Orbison-styled vocals mixed with Hank heartbreak and Buddy and Chuck early-rock energy, finished with just the right amount of polish and radio readiness.

Country Standard Time: There are still folks who don't associate Boston or New England in general with country and roots music (people who never heard Blood Oranges or have never heard you guys or Sarah Borges or the Starline Rhythm Boys, etc.). Why do you think that is, and have you run into people who are surprised when they find out you're from Boston? And can you talk about the country/country-rock scene in Boston?
Ward Hayden: Sometimes you have to go searching for good music. And hopefully people who are fans of Americana and rock 'n' country music are actively searching for what's new and what's out there. As a band we're always doing what we can to gig frequently and get out on the road to perform in different cities and towns, as well as using tools like the Internet, radio, and print media to get the word out about what we're doing, where we're playing, and what our music is all about. We have a lot of fun when we perform, so our hope is that it carries over into the audience and that they go home with a smile on their face, a CD in their hand and their name on our e-mail list. That way, we can stay in touch and let them know when we're coming back to town. We always encourage fans to reach out to us and let us know what they like or even don't like. On that note, our e-mail address is girlsgunsandglory@yahoo.com. (laughs)… It's kind of cool, actually, when we go out on the road, and we run into a lot of folks who are very surprised we're from Boston. They hear the music, and it's not something they associate with that part of the country. It's amazing, though, there's such great Americana music being made up in Massachusetts. Sarah Borges is incredible, and then you have great acts like you mentioned and groups like Session Americana and Dennis Brennan that just have such a killer blend of folk, rock and country music.

CST: Your sound is a hybrid one, as is your approach. Only One Thing, for example, sets a classic country song scene with its big white Ford, but the song also sports a big, recurring pop-rock hook. Can you discuss the influences and past musical experiences that merge to make the Girls Guns & Glory sound?
WH: I think that all the members of Girls Guns & Glory have fairly diverse musical pasts. Colt (lead guitar) and John (drums) are more classically trained and have spent time in jazz and marching bands as well as hard rock and funk outfits. Bruce (bass) and I used to play in an avant-garde noise-rock band before GGG formed. In fact, I was the drummer for that band (The Stan Thompson Band), and GGG is my first real time stepping out as a singer/guitarist. I think that when we came together the songs that I was writing were more folk- and country-tinged and what was great was how all of their previous experiences in different genres influenced a hybrid folk/rock/country kind of sound. I originally wanted to make music that was very stripped down, more of a singer/songwriter vein. However, once we brought drums into the mix, everything got louder, and the band naturally progressed toward music that had more of a driving rock sound that was laced with a lot of twang.

CST: In a similar vein, you can often gain insight into a band by the cover songs they do. Do you play any other artists' songs in your live show? If so, what do those choices say about Girls Guns and Glory?
WH: We usually throw a cover or two into the mix. We're all big fans of Johnny Cash, and I swear you can't lose with some of his songs. Folsom Prison is a favorite of ours. We also dip into some Rolling Stones and even a Woody Guthrie tune. Lately though we've been branching out a little, and for the Cassavettes anniversary show we put together a version of the pop song Beautiful Girls, which has actually stuck around in our repertoire.

CST: There have been glowing reports about your performances at the recent AMA Conference in Nashville. Please tell us about that gathering and that overall experience.
WH: The AMA Festival was blast. We had a great time down in Nashville! We met a ton of great bands and people, got to perform at two AMA Showcases and saw so much incredible music. It was great to be in an environment filled with so many people that were into the kind of music that we are into. We got to hear bands we'd never heard before and talk to people about the music we love. It was really cool just to share experiences and hear how other bands and folks aligned with Americana music are carving their paths and enjoying and making great music.

CST: Liner-note scholars will note the name of Jeff Calder of the Swimming Pool Q's among the additional musicians. How did he end up on "Inverted Valentine," and can you talk about some of the other guests?
WH: Our manager, Rob Loyot, is friends with Jeff, and when we were listening to some tracks and going over our notes in pre-production, Rob suggested that we see if his friend would like to come try out some piano on a song or two. We had Jeff down to the studio for about half a day, and he did a wonderful job on a few of the new tunes. We also had Matt Pynn of Will Dailey and the Rivals come in to play pedal steel. Dinty Child of Session Americana came down and played everything he could fit in his car; from fiddle to accordion to even the mandocello on Unrequited Love. That was incredibly fun to see him emerge from his car with this instrument that we never could've imagined being on the record and then having it sound like it was forever meant to be on there. We also had Chuck Fisher come in to do some flamenco guitar work on Temptation, which just turned out to be a very exciting studio experience. He just hears things a different way and is a real pro when it comes to studio work. All these guys were so great to deal with and came to the table with wonderful ideas that I feel added a lot to the record and helped to put some sticky sweet icing on the GGG cake.

CST: Okay, if there were room for two more G words in the band name, what would they be?
WH: If we could put two more G's in there, I think we'd pick Girls again because, I mean, come on, can you ever get enough? And Gunga Din, because that's the first thing that came to mind with that question.