Just a Little Talk With Myself (Self-released, 2022) 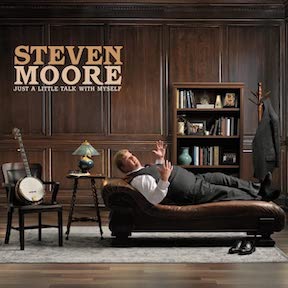 Steven Moore is a banjoist that has won several highly rated banjo competitions, including Rockygrass and MerleFest. The Ohio banjo player debuts with "Just a Little Talk with Myself," which is as impressively musically as it is in terms of the stellar guests recruited for the effort. First of all, eight-time IBMA winner Scott Vestal produced the album, which includes contributions from Stuart Duncan, Byron House, Cody Kilby, James Eliga, John Cowan, Gaven Largent and Elliott Park.

Opening track "A New Leaf" is an uplifting banjo instrumental. "All of Me" is also an instrumental, a banjo reading of pianist Jon Schmidt's tune. The melodious title track is a collaboration between Moore for the music and David Mayfield on the lyrics and vocals. "The Ride" is classic bluegrass with sterling fiddle as one would expect from Stuart Duncan, who complements Moore's rapid-fire picking.

Arguably, save a couple of gems in the second half, the strength of the album lies in those first four tracks and these three originals that follow – Moore's mournful, but stirring instrumental "Goodbye, Love," with string arrangements from Chris Sexton, the Irish tinged "O'Connell Street," which features prime Duncan as well; and "One Small Step," a tune Moore wrote as a teenager.

Only one original, "Dani," for his wife, is among the remaining seven that consist of covers for the likes of "Take Me Home, Country Roads," "Shady Grove," "When Johnny Comes Marching Home" and three more lesser knowns. Among the most interesting of these is "Bent to Fly," a cover of a Slash song sung by Cowan and the closing medley, an interesting juxtaposition of a classic bluegrass song "Angeline the Baker" and "Welcome to Beijing," the latter for Moore's college roommate who hails from the city and with whom Moore is longing to reconnect with. East meeting West doesn't always work, but this one does as does the album as a whole. Moore has the chops and an innate gift for melody.