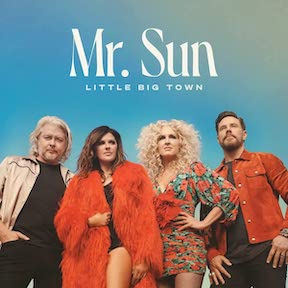 Little Big Town has always been one of the more consistently good modern country groups. This latest album, not surprisingly, is also good. However, it's not exceptional. Sure, the quartet explores the happy and sad sides of love and romance, as per usual, but few tracks rise far above the merely good level.

Karen Fairchild sings lead on "Three Whiskeys and the Truth," and is a dead ringer for Lady A's Hillary Scott. This is somewhat ironic, as Lady A is probably the contemporary country act most stylistically similar to Little Big Town. Written by a group of top tier Nashville songsmiths, this song just feels the most emotionally honest of the bunch. It's better than the single "Hell Yeah," which turns an expression of affirmation into a sad admission by singing it as 'hell, yeah,' to describe a soul that's going through hell.

The quietly reflective "Rich Man" speaks to finding contentment, and country music explores the satisfied life better than most other genres. And while we all would hope to agree with Jimi Westbrook's happy state of being, he doesn't really tell us anything especially new or noteworthy. It just feels like a song that's been done better by others, many times before.

One sonic highlight is "Gold," which opens with an impossible-not-to-love instrumental intro. It's quite funky for a country song. This quartet of fine vocalists also sings it well, as it does on every track. The album earns a mild thumbs up, but it may leave you wishing it produced a whole lot more thrills.