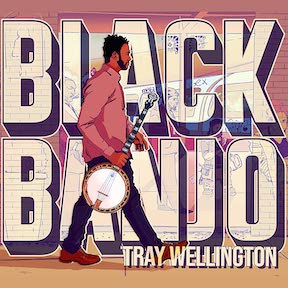 Tray Wellington is an earnest banjo player, a veteran of the bluegrass festival and camp circuit, a recent graduate of Bluegrass Music Program at East Tennessee State University, a former member of Cane Mill Road band and an IBMA Momentum Award Winner. He's got chops. "Black Banjo" represents his first full-length solo project, and it's an engaging and attractive set of songs.

"Black Banjo" is presented as a statement of purpose from an accomplished instrumentalist in the beginning of his career. Yet, it also has a depth of vision which promises more than just aspiration.

Wellington came to the banjo, as many do, learning Scruggs-style rolls. But, the landscape of these songs not only reflects Scruggs' influence, but also draws from jazz, old time music and other traditional influences. Wellington makes a decent case for the notion that whatever the musical style or genre, the artist is in control.

Wellington check the boxes of standard bluegrass form with a breakaway ("Pond Mountain Breakaway", a waltz ("Unknown Days Waltz"), a turnaround ( "Georgia Turnaround") and even a vocal duet with traditional music mainstay Tim O'Brien ("Wasted Time"). A couple of adaptations of jazz standards ( Roy Hargrove's "Strasbourg/St. Denis" and John Coltrane's "Naima") allow Wellington to swap out banjo voicings for trumpet and tenor saxophone respectively, and explore how all the pieces fit.

Wellington has brought in side players who can, for the most part, keep the pace, and help cement the bluegrass vibe. Jon Stickley lays down some standout licks on guitar, whilst three fiddlers (Carley Arrowood, Lyndsay Pruett and Avery Merritt) give a strong boost to the material. Producer Jon Weisberger's estimable sound design suits this project well.

Wellington's vision is layered, and confident. "Port of Manzanita" is a case in point. No song with that title can escape comparison with Tony Rice's legendary album "Manzanita," but one imagines that Wellington invites the comparison. Wellington's "Port" is doubtless inspired by Rice's work. Fiddler Merritt learned from Rice's comrade in arms Darol Anger. Stickley takes more than a few Ricea-influenced turns. Wellington's banjo leavens the song.

So, what's the point? Tony Rice's 1970's masterwork famously had no banjo. Wellington is ready to take the banjo forward, and it's a bold statement. "Black Banjo" shows he's up to the task.