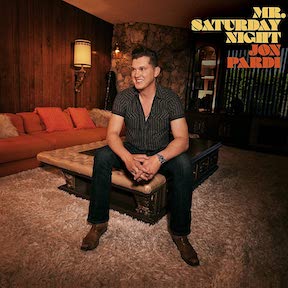 Jon Pardi's "Mr. Saturday Night" sounds as though most of its stories take place on the weekend at an idealized country honky tonk. Many of these drinking holes also feature swinging doors and jukeboxes. They don't seem like citified bars, but they perfectly fit Pardi's enjoyable neo-traditional song cycle.

Although the drums pound much harder on the single "Last Night Lonely" than they do on truly traditional country music, Pardi incorporates far more fiddle and steel guitar than most other mainstream country artists. Therefore, we give him grace for that.

Pardi also includes multiple drinking songs (a traditional country music staple), including "Fill 'Er Up" and ""Workin' On A New One," which speak to an intention to get drunk, damning the consequences. The title track contrasts a carefree party animal (on the outside) with the actually brokenhearted man within. "Last Night Lonely" is a bar setting where a knight in shining neon light rescues a damsel that's depressed from her lonely life.

A few of these songs take place away from the barstools and suds, though. "Santa Cruz" is a California beach anthem, while "Reverse Cowgirl" finds a hurt lover begging his departing girl to turn her vehicle around and come back. Pardi's weed anthem "Smokin' A Doobie" is also set in the great outdoors.

Lyrically, this album plays out as though the pandemic (and most of the last 20 years or so of commercial country music) never happened. Pardi doesn't ever address masks, lockdowns or our recent widespread illness anyplace in these songs. Instead, he mostly sings about finding and losing love and drinking about it – either way. You may not ever find a tavern in your town like the variety Pardi sings about here, but if you let yourself lose yourself in these fine country songs, you'll feel like you're already there.