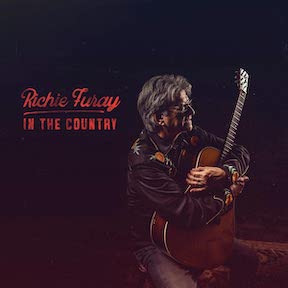 Richie Furay has lived quite the life, ranging from his membership in Rock & Roll Hall of Famers Buffalo Springfield to his significantly different role as the senior pastor of a Colorado Calvary Chapel. However, his "In the Country" album of mostly '90s cover songs, reminds us all how Furay also has significant country music credentials. He formed the country-rock band Poco, which was one the first acts of its kind in the '60s, along with contemporaries The Byrds and The Flying Burrito Brothers. This album isn't nearly as groundbreaking as were some of his past bands, but it's nevertheless one fine country record.

At the center of it all is Furay's voice, which has lost none of its high lonesome beauty. His vocal instrument is at its best during "Lonesome Town," an older song that was a hit for Ricky Nelson. With its steel guitar, this arrangement transforms that oldie into more of a country vibe. "Chalk," a Buddy and Julie Miller song from 2009, opens the album and bucks the project's general rule of mainly only including '90s country songs. It's a heartbreaking song, like so many others from the Millers.

Furay is joined by John Berry on that '90s star's hit, "Your Love Amazes Me," which brings a little era star power to the project. Furay goes all the way back to Poco's debut for that album's title track, "Pickin' Up the Pieces," which is included as one of the record's bonus tracks. Furay sings it with just as much hoedown country spunk as he brought to the 1969 original.

Oddly enough, Furay was viewed as forward-thinking, back when he mixed country with rock during his Poco days. Now, with this record's traditional arrangements, he sounds more like a throwback to pre-contemporary mainstream country days. Times and musical styles have evolved, but that Furay's voice has hardly changed. This album finds his fine voice "In The Country," which is right where we want it to stay.