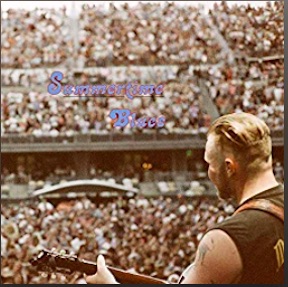 Some have described celebrated singer/songwriter Zach Bryan's style as 'sad boy country' and only this sort of unhappy artist can make even getting off work sound a little depressing. However, Bryan does just that with his "Summertime Blues EP" opener, "Quittin Time." The track is introduced with mournful banjo and fiddle, which foreshadows Bryan's restless lyrical wait for his workday to end. Yes, he sings about how "I'll take my gal to town" after his shift concludes, even though he doesn't exactly appear to be 'the party spirit.' Bryan may be a bright light for traditional country music fans, but he often times sounds more like a bluegrass man of constant sorrow for much of this nine-song EP.

Although it's short and only clocks in at 2:07, the modern-day Bonnie & Clyde tale, "Matt & Audie," hits hard. It tells the story of a couple that "bought an Astro van and a loaded revolver," with an illegal plan to escape poverty. "And he told his lover, "No more just scraping by/We're gonna be richer than the big machine/I will buy you diamonds bigger than the stars at sea." Bryan takes a relatively amoral perspective on these robbers-to-be. "Matt and Audie were a few fine folk/Made love in the morning with a few high hopes." Perhaps, as Bruce Springsteen once sang, these two had debts no honest people could pay. Or maybe it's better to die on your feet, than live on your knees. "I'd rather die a desperate man than a man that gets caught," Matt is heard to comment.

"All The Time," which is semi-close to a love song, has another one of those lines that just jumps right out at you. "There's got to be more to this than bein' pissed off all the time." This could be commentary on a troublesome relationship. Then again, Bryan might be commenting on life in general and contemporary America in particular.

The act PiL once sang how "anger is an energy," though, and anger often energizes Bryan's music. Whether sad or angry, though, Zach Bryan is passionate, energized and inspired throughout this brief, but noteworthy extended play release.