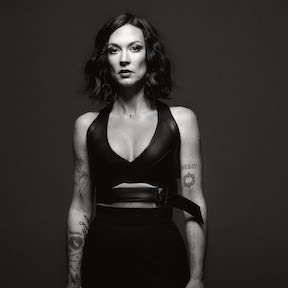 It's been said (maybe, a little too often) that the best things come to those who wait, but the cliché holds true with Amanda Shires' album "Take It Like A Man," as its second to last song, "Lonely At Night," is also its best selection. It's a piano ballad, in the Bacharach/David tradition, where Shires and her backing vocalists simply shine. It also includes classy horns and electric piano, for an unbeatable sonic mixture. Yes, "Take It Like A Man" is one fine album, driven by Shires' beautifully quivery vocal style, but you may be warranted for skipping to the end first. You should also be aware that it gets quite dark in many places.

A close second to "Take It Like A Man" is "Everything Has Its Time," which closes out the album (another 'last shall be first,' instance, one might note). This other one is a sweet, orchestrated ballad that Shires sings beautifully. I know what you're thinking: 'But this ain't a country music description!' And you're right. But it's dang good, which beats even bad country every time. Shires begins the album with a completely different tone and attitude. "Hawk For The Dove" finds the violinist/fiddler bowing with an angry, aggressive approach. With "Stupid Love," Shires digs down deep for some Southern soul, complete with organ and horns in the instrumentation.

The album's title track fully brings out Shires' winning Dolly Parton-like vocal vibrato. Of course, the track is far more dramatic than much of Parton's material, which veers decidedly toward the sunny side. The title song "Take It Like A Man," feels a little like something one might hear in a vintage, dramatic movie. It requires Shires to sing strongly and sing it powerfully she does. Although there isn't a lot on this album that feels like true country music, the piano-accompanied "Empty Cups" has a plenty of country feel going for it. Another one, "Don't Be Alarmed," features Jason Isbell's acoustic guitar picking. These two are, at least, country associated.

Most of "Take It Like A Man" is as serious as Shires appears to be pictured on its cover. From everything we've seen and heard, Shires is in a happy marriage with fellow musician, Jason Isbell, so the album's overall darkness and dread is a little surprising. One trembles at how much darker Shires might get with a full breakup album. Then again, there also aren't a whole lot of yucks on Isbell albums either. Perhaps they truly are two peas in a pod. This is, to build upon the record's title, the sound of Amanda Shires fully manning up.