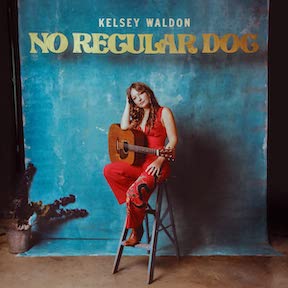 Kelsey Waldon sings with a distinctly country vocal tone, and producer Shooter Jennings surrounds the singer/songwriter with plenty of traditional instrumentation. However, her lyrics go so much deeper than superficial references to sweet tea and red dirt roads, as is the case with too much modern country music.

For example, the character study of a seemingly innocent young lady in "Sweet Little Girl" features the drug abusing reference of, "Took everything she had to not to put daddy's money in her arm." Later this 'sweet little girl' announces, "I'm gonna drink myself drunk." Then, just to prove these are not just lyrical outliers, "Tall and Mighty" finds Waldon commenting, "Most of my friends are on methamphetamines." Furthermore, she's bluntly honest about her own life, as she moans, "Singin' my heart at some shitty bar." This talented artist – much like her druggy friends – just "can't stand tall and mighty all the time."

Then, just when you think you've found at least one pure, romantic sentiment in "Simple as Love," Waldon sings, "Just as a junke's got its itch/It leaves you wantin' more, wantin' more of it." Nothing is simple for Waldron, especially not love.

"Peace Alone (Reap What You Sow)" is supported by acoustic instrumentation that includes plenty of banjo and fiddle. Sawing fiddle also drives the mountainy "Backwater Blues."

Kelsey Waldon obviously loves singing traditional country music, but she's also a realist. She may be from Kentucky, but she's never going to be some sort of sonic travel brochure for an overly idealized south. No, she's more concerned with telling the truth – even when it hurts – which makes "No Regular Dog" something especially unregular in all the best respects.