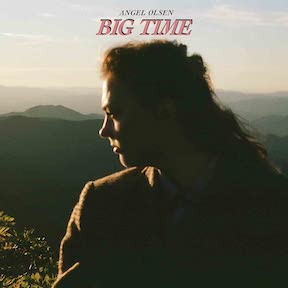 Angel Olsen's "Big Time" is a concept album of sorts, as much of it addresses her grieving over the the death of her mother and father within weeks of each other. Much of it is taken at an unhurried, languid pace. (Think Mazzy Star gone country as a reference point). While not explicitly country, much of this project will hold appeal to traditional country music fans. Many of these songs would fit nicely onto any proverbial brokenhearted jukebox.

While sad, Olsen sure sings pretty throughout. She wallows with a Patsy Cline-like purity while pouring out her blues. Jonathan Wilson, who has reclaimed the beauties of Laurel Canyon folk music with many of his productions, has given Olsen plenty of sonic space to express her emotions without studio element distractions.

The title track, for example, surrounds Olsen's near-perfect voice with plunky – but quiet – honky-tonk piano and empathetic steel guitar. It's as country as an alternative artist could possibly get. Olsen sounds wise beyond her years throughout "This Is How It Works," which she emotes with hushed sadness. "Chasing The Sun" concludes the album with a piano-driven singer/songwriter-esque ballad worthy of Joni Mitchell. Wilson has added strings to it, which causes the listener to picture Olsen singing it in some dive bar during a classic noir film. You just don't want this one to ever end.

"Big Time" is not an album one can ever imagine being created in Nashville. That's a shame because it was made with an attention to quality so sorely lacking in far to many Music City productions. These songs may elicit a good cry now and again, but they will also fill you with a sense of awe and wonder at its utterly breathtaking beauty.