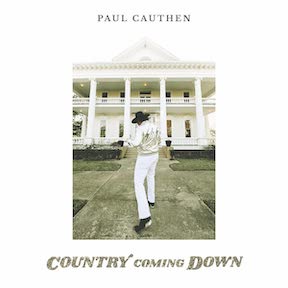 Paul Cauthen may well have single handedly revived the country funk genre, first coined in the late '60s and early '70s and described by Jessica Hundley of The New York Times as "an inherently defiant genre - a style that encompasses the elation of gospel with the sexual thrust of the blues, country hoedown harmony with inner city grit. It is both studio slick and barroom raw." Even before listening, the titles of Cauthen's songs such as "Country As Fuck," "Country Clubbin'" and "Fuck You Money" on "Country Coming Down" embody this description first applied to artists such as Tony Joe White, Bobbie Gentry, Bobbie Charles and several others. Yet, it's fair to say that Cauthen is not like any of them.

With his bass-leaning tenor voice, dubbed Big Velvet, the newly married, sobered Cauthen bursts forth, claiming that he'll start a new religion called "country as fuck." The syncopated, swampy beat somewhat evokes Jerry Reed, but again, Cauthen is not nearly as tame. They don't come much brasher. Working with his regular collaborators Beau Bedford (Texas Gentleman), and Jason Burt (Medicine Man Revival), they frame Cauthen's singular vocals with a stinging guitar solo in "Caught Me at a Good Time," bring a swirling Wurtlitzer to "High Heels" and imbue the satirical "Country Clubbin'" with a disco beat and a tongue-in-cheek touch of female backing vocals.

In the closing track, Cauthen delivers such phrases as "hot dog holly golly dagnabit" as if it's everyday language. Yet, there's a few laid back, serious songs such as his ode to his wife in "Till The Day I Die" and his desire to live "in a cabin in the country, far away form the city lights" in the title track. Yet, the memorable tunes, aside from those already mentioned will be the snappy "Cut a Rug," wherein he pokes fun, namedropping several dances or the raucous stomp of "Champagne and Limos" ("with the blacked-out windows'), which playfully assails the jet set. Cauthen is comfortable in his own skin, by turns witty, incisive and tender. Defiant, even the best outlaw country artists have never done quite this way.