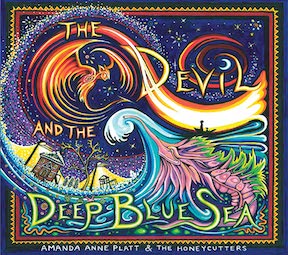 With increasing numbers of streaming singles being released, many music industry pundits have claimed that the full album may be nearing its demise. Nonetheless, there are plenty of examples to disprove that theory, one of which is this double album offering, "The Devil and The Deep Blue Sea," from Amanda Anne Platt & The Honeycutters. Ironically, Platt has tried both avenues, having released many of the songs in this collection as singles, but she felt the need for two cohesive statements – "The Devil" representing the more upbeat, outgoing and rowdy side and "The Deep Blue Sea" the more contemplative, pensive and dreamy side.

As such, there's a twangier tone to "The Devil" with guitarist Matt Smith on electric guitar versus the predominance of pedal steel on "The Deep Blue Sea." In fact, it's the talents of Smith and drummer/keyboardist Evan Martin that make the band work so well across the two contexts, unfailingly finding the right timbre to envelop Platt's authoritative, confident voice that can be sweet, aching and joyous, sometimes even in the same song.

The instrumentation fits: a bit heavier on the first and lighter on the second. Yet, the two statements fit well together. It carries her through her origins in New York (the opening "New York") to the brooding "Dallas" to arid California in "Desert Flowers." Don't miss the bouncy country rocker, "Girls Like You,'' inspired by Mary Magdalene as Platt discourses on the many roles women have taken, wherein also often unfairly stereotyped.

While "Devil" may represent the more fully realized band statement, the nuances of Platt's vocals shine brighter as she tenderly caresses tunes such as the softly strummed "This Night," with "Always Knew" and the closer, "There May Come a Day" rendered as duets with only keyboardist Martin and her acoustic guitar in accompaniment. The former is lullaby-like, written for her daughter with lyrics such as "Now for every rule I've had to follow/every truth I've had to swallow/there's another silly notion I outgrew/but I always knew that I would love you."

With her band consistently in synch throughout, this is indeed Platt and her band's masterwork. She explores so many themes whether it's nostalgia, family, friendship or fond memories of indelible locales that it will take multiple listens to fully enjoy and appreciate her lyrical gifts.

CDs by Amanda Platt & The Honeycutters