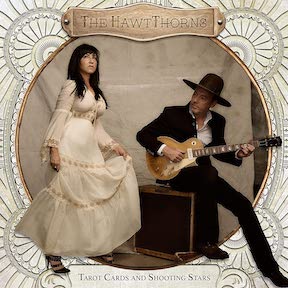 The once California-based husband-and-wife duo, the HawtThorns (KP and Johnny Hawthorn), relocated to Nashville, but recorded this sophomore release "Tarot Cards and Shooting Stars" in both L.A. and Music City. KP (formerly Kristin Proffit) has long been a leading voice of 'coastal country' in their native California, but this move has them expanding their palette to move beyond country rock to a more developed mix of that includes acoustic ballads and even some southern soul. Johnny is a veteran songwriter, multi-instrumentalist, lead guitarist and record producer who hails from the rock side.

They wrote all 10 songs excepting a bright cover of Neil Young's "Lotta Love." The tone of that cover, however, typifies the album's consistent, almost over-the-top joyfulness. Arguably, the closing lullaby, "Georgia Cries" doesn't fall into that camp, but the others purposely do as KP wants to present a happy ending to a couple of tough years. They presented affecting melodies in their debut, 2019's well-received "Morning Sun." Here they've added strings and keyboards to produce a lusher, more layered sound behind KP's clear, effervescent vocals and Johnny's rambling, jangling guitars.

They've also brought new approaches. "Let's Get Together" has elements of southern soul and R&B, with terrific lead guitar from Johnny that mixes in classic country rock riffs. "On the Way" contains the lyric that spawned the album and mixes in Dickie Betts-like guitar lines and power chords. In fact, those two, along with the buoyant opener, "All the Right Reasons" should translate well to radio. Another standout, "The One That Got Away," comes near the end, a duet, as opposed to the mostly KP-led songs, which reveals infectious vocal harmonies in a softer romantic song, bathed in electric and pedal steel guitars.

While their last album likely left you smiling, this more fully realized effort will not only do that, but you may find yourself singing along to share in their contagious joy.

CDs by The HawtThorns