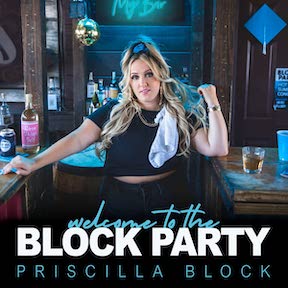 Whether she sings sad or happy, at her best, Priscilla Block may remind you of Miranda Lambert. Even when the production for "Welcome To The Block Party" gets a little too loud and busy, nothing can drown out Block's downhome country singing style. Same goes for Lambert. However, Block consistently comes through as a special talent on this important new album.

Block's conversational singing style during "Peaked In High School" especially brings Lambert to mind. It's a lyric filled with vivid memories, much like Lambert's "House That Built Me." In contrast to mainstream country music's unwise obsession with reliving high school glory days, Block's song expresses how her life has actually gotten much better after high school.

Block is also adept at putting a true cry into her vocal. The best instance of this admirable trait is "Like A Boy." She tells of how it's "just like a boy to walk away." Although she doesn't explicitly say it, Block is also telling us how she was the mature adult in that relationship. You can also feel tangible hurt expressed with "Heels In Hand." Block is heavier, weight-wise, than your typical female country singer. This is something that would normally be mention in a review – ultimately, it has nothing to do with the quality of her music. However, she addresses her weight issues directly with a song called "Thick Thighs." Her plus-size physique is faced with humor, too, as she admits to loving extra fries more than exercise. Like most of us.

There's a lot of quality music found on "Welcome To The Block Party," all of which Block had a hand in writing. It will be interesting to see how mainstream country handles Block's music. The color barrier is starting to be broken down with new Black talent, like Mickey Guyton and Jimmie Allen. Now, will the body positive movement win a victory in country music with Priscilla Block, the same way Lizzo made similar inroads on pop radio? You don't need to see what Block looks like to recognize she's on the cusp of great things. Let's hope Block's party is just getting started.