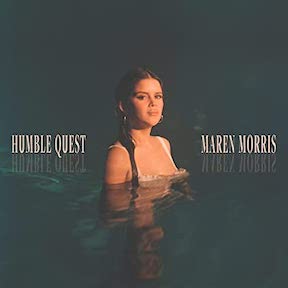 Seeing Greg Kurstin listed as the producer on Maren Morris' "Humble Quest" album, can't help but raise a few eyebrows. His resume includes the likes of Pink and Sia, but not many country-related artists. Furthermore, it wasn't too long ago that Morris had big hit with "The Middle," a decidedly pop hit single recorded with the Russian-German producer, Zedd. This album's results are not as overtly pop as that recording, but not as country as her country hit "My Church." However, to paraphrase her song "The Bones," when the bones are good, you always end up with something good.

It's heartening to hear the acoustic guitar-driven "I Can't Love You Anymore," which is a nicely thumping, steel string-accented song of romantic devotion. The title track is pop-rock, but certainly not stylistically equivalent to the dance groove of "The Middle."

Even though the album isn't always sonically satisfying, Morris' songwriting is consistently personal and sincere. Her slightly quivering vocal is especially pleasing on the ode to friendship of "Good Friends." The best song, not surprisingly, was co-written with Hillary Lindsey and Lori McKenna. The line, "You come and go like a whisper," smartly recreates the visualization of a quietly gentle hummingbird.

One suspects Maren Morris will always have one foot in pop, as well as the other foot in country. While artists like Miranda Lambert and Carley Pearce continue to prove how artists can create heartfelt songs without sacrificing traditional music elements too much, Morris doesn't seem to want to travel down that same path. With that said, though, we'll take what we can get. An album with songs this strong is always welcome, no matter the packaging.