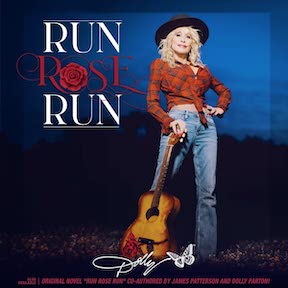 The Dolly Parton album, "Run, Rose, Run," is an aural companion to an original novel of the same name that the county music icon co-authored with popular novelist, James Patterson. Songs are inspired by characters in the book, and encouragement is a primary lyrical theme, from start to finish. It's simply put, one feel good collection of songs.

This country star has given us a decidedly traditional country album. "Driven," for example, incorporates plenty of fiddle and banjo for an upbeat bluegrass workout. Parton also sings duets with a couple of wonderful male country voices. Joe Nichols spars vocally with Parton on "Los and Found," while chip-off-the-old-block Ben Haggard (Merle's son) is paired with Dolly for "Demons." Parton closes the album with another duet, the orchestrated "Love or Lust," where she's joined by Richard Dennison.

A couple of tracks find Parton coming off like that fighter, Loretta Lynn. The get-tough advice of "Woman Up and Take It Like A Man" even reads like a Lynn song title. "Firecracker" also sounds like something Lynn might sing. This one is once again driven by acoustic bluegrass instrumentation. Parton even sings some of the latter's lyrics in a humorous Elvis, "Burning Love" vocal style.

When Parton's not giving out life coaching advice or encouragement, she's putting out warnings, like she does with "Snakes In The Grass." Although she's consistently positive, she's nevertheless realistic enough to admit how we all have faults and troubles, addressed with "Demons." Then on the gentle "Secrets," which includes some really nice mandolin, she speaks to how keeping secrets can cause a divide between intimates.

It sometimes seems as though Dolly Parton is unstoppable. She's more active and adventurous than many artists half her age, and there just may not be anything she's afraid to try. It's all well and good that she's extending her writing experience, just as long as she doesn't ever stop writing fine songs like these.