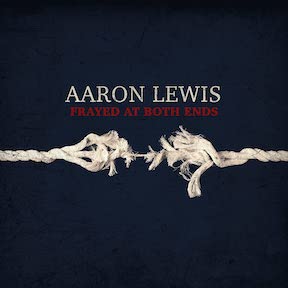 Aaron Lewis' "Frayed At Both Ends" features the singer/songwriter's profanity-laced political diatribe, "Am I The Only One." If you're not on Lewis' (conservative) side of the political spectrum, you may steer clear of Lewis' album. This would be understandable. Many don't appreciate politics mixed in with their music. However, Lewis – who began his career as the vocalist in the grunge band Staind – has become quite an effective country singer, and this album finds him at his best.

Despite his roots, "Frayed At Both Ends" is also consistently traditional, instrumentally. The sad breakup song "Goodbye Town," for instance, is driven by acoustic guitar and features nice harmonica fills. Lewis even whistles on it, and you're not going to hear whistling on any grunge song. Lewis is joined by a couple of country heavyweights, Vince Gill and Dan Tyminski, backing Lewis up vocally on "They Call Me Dock." The aforementioned "Am I Only One," is more stripped down and unplugged than just about anything else you're likely to hear on country radio. You can love the arrangement, even if you hate his politics.

One can only hope Lewis is fully embraced by the mainstream country music establishment. His album is filled with heartfelt songs, which are performed beautifully and traditionally. It's fun to see how Lewis has evolved. Maybe some of us didn't see this complete evolution coming, but many of us are glad Aaron Lewis has joined the country music world.