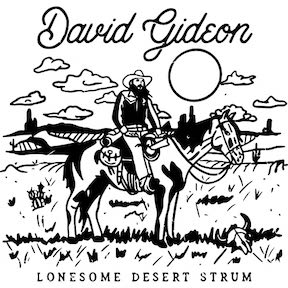 Gideon has plenty of fodder for his many stories. He's lived in Austin, Key West, a hippie commune in Tennessee and as a ranch hand in Northern California. The wide open feel of the southwest landscapes imbues the breezy opener "Southwestern Skies," dissolves into a slightly psychedelic, off-kilter "My Birthday," and finds a steady classic country groove in "Ashes," featuring strong fiddle from Contreras and one of two songs co-written with country hit maker Wood Newton. The other is the standout, perfect for that dancehall two-step, "A Woman Like Her."

"Movin' to the Country" carries a classic Cash "Folsom Prison Blues" feel propelled by Vaughan's guitar and Hinson's pedal steel. Contreras drives the nostalgic "Nice to Meet You" while Vaughan digs deep with tremolo guitar effects in "Wings of an Angel." The title track takes its name from the way that Vaughan describes Gideon's guitar playing and it plays out in relaxed fashion against more tremolo guitar and wispy pedal steel. "Drifter" fits the part of this rambling, restless troubadour.

While "Ballad of Crazy Horse" is drenched in the desert-like pedal steel emblematic of the, no distinctive melody or catchy element emerges. The team of Vaughan and Scruggs from Stuart's Fabulous Superlatives drive the classic honky tonk sound in "Red Boots" and return for the closing ballad, "Moonlit Lake," obviously a special place as gleaned from Gideon's endearing vocal. This is one terrific, albeit just short of masterful country record – solid songs, strong vocals and outstanding musicianship.