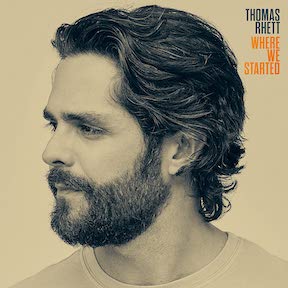 Thomas Rhett's "Where We Started" begins with a wonderfully positive relationship song titled "The Hill." Over a quiet, acoustic guitar arrangement, Rhett sings of how a successful marriage is the hill he wants to die on. In other words, if he's going to fight for anything, he's going to battle for his romantic partnership. Unsurprisingly, Lori McKenna had a part in writing it. When it comes to setting the right priorities in life, McKenna is one of our greatest voices of reason. Most of "Where We Started" isn't quite so serious. But it's not bad, either.

Rhett's lazy day, beer-guzzling collaboration with Riley Green, "Half of Me," rings true. Sometimes, we just want/need whole days of doing pretty much nothing. Green is best known for heart-tugging, serious songs, so it's good to hear him lighten up a little here. "Anything Cold," is also a harmless drinking song. "Bring The Bar" promotes some stay-at-home drinking. So, with the repeated focus on downing adult beverages, it many times puts the album in Chris Janson's musical bartender territory. The equally light "Bass Pro Hat" is also far better than its product placement title might suggest. For the most part, then, the album's relatively unchallenging inclusions are inoffensive and enjoyable.

Rhett's albums are usually much more emotionally balanced than his live shows, which is why it's heartening to hear the lovely, partially spiritual "Angel," as well as "Death Row," which speaks bluntly about prison and prisoners, as only country music can do. These two stellar examples make one scratch his/her head over the title track, a pop-y collaboration with Katy Perry for no apparent good reason.

If big country stars, like Thomas Rhett, ever take up the trend of performing whole albums from start to finish, "Where We Started" would make a fine choice. As long as the neon signed bar is open, though, don't expect Rhett to change his setlist too much. Just be glad he gets his albums mostly right.