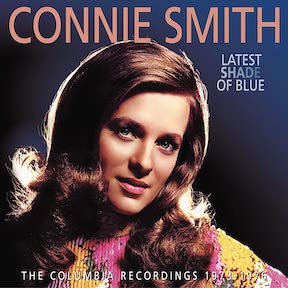 Perhaps no artist in any genre has been more consistent than arguably the greatest, though not necessarily the most famous or flashiest female country singer of our time, Connie Smith. Put this box set, "The Latest Shade of Blue: The Columbia Recordings 1973-1976" right next to 2021's "The Cry of the Heart," her 54th album, and it's immediately apparent that Smith continues her emotive, classic country sound almost half a century later.

Consider also that this is the third, following the two sets covering her previous years at RCA Victor, "Born to Sing" (1964-1967) and "Just For What I Am" (1968-1972). The 80-page book includes dozens of previously unpublished photos, a detailed discography, a session-by-session discussion of the making of the records and an overview of Smith's life as she balanced session scheduling, Grand Ole Opry performances and touring performances while being an actively involved, dedicated mother of five. The introduction is by Smith's husband and musical collaborator Marty Stuart.

Smith has long been known to sing Christian and gospel songs in addition to her country standards and a special feature here is the inclusion of "Connie Smith Sings Hank Williams Gospel." It also has hard-to-find and out-of-print recordings such as her Christmas album, "Joy to the World" among the 10 albums sprawled across these four CDS.

This period, though as much as any, documents Smith's steady resolve to stick to her country roots during a pop era when much of country radio was devoted to hits from John Denver, Olivia Newton-John and others. Just as she does today, she was covering writers such as Dallas Frazier, Don Gibson, Bill Anderson, Doug Kershaw, Tom T. Hall, Lefty Frizzell, Harlan Howard, Eddie Raven and Jessi Colter.

It's difficult to cite the best tracks among the 96 here, but some classic gems such as her take on the George Jones "A Picture of Me (Without You}," her single "Ain't Love a Good Thing," her co-write "You've Got me (Right Where You Want Me)," "Is This All You Hear (When a Heart Breaks)" and "I Got a Lot of Hurtin' Done Today" on the first two discs are must listens. Disc Three, while primarily gospel, also has her take on the Everly Brothers' "('Till) I Kissed You" with another Everlys' tune, "So Sad" appearing on Disc Four.