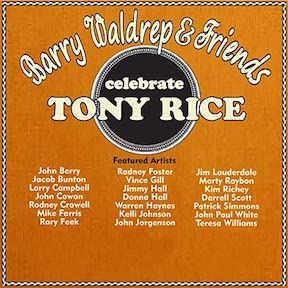 When Tony Rice passed away on Christmas Day, 2020, the acoustic world lost one of its finest and most influential guitar players. His impact on bluegrass, grassicana and associated acoustic music was immeasurable.

Barry Waldrep is likely best known for his studio work (including a series of 'Pickin' On'-type titles for CMH Records), his bands Rollin' in the Hay and Telluride, and as a sideman for the likes of Zac Brown, Joey + Rory and John Berry.

Waldrep is most obviously a gifted guitarist and his leads and accompaniment throughout this 21-track collection are a fine tribute to Rice. The chosen material — many standards and familiar — allow the album to unfold naturally; the consistently smooth presentation of this music is further acknowledgement to Rice's approach to acoustic music.

The album features a wide variety of artists pulled from Americana, southern rock, jam band, bluegrass and mainstream country. It opens with country rock from Wet Willie's John Hall ("Why You Been Gone So Long") and closes with the soulful passion of John Cowan ("Me and My Guitar").

Each delivers the expected exceptional quality of performance with Crowell's "Song for the Life" and Scott's rendition of Gordon Lightfoot's "Ten Degrees and Getting Colder" jumping to the lead of the queue. A handful of Lightfoot songs are included, a couple from Ian Tyson (including an instrumental rendition of "Summer Wages" with Tammy Rogers and Spooner Oldham's contributions especially impressive), and numbers sprinkled from throughout Rice's lengthy career round out the album.

Important within the Rice oeuvre, "EMD," a David Grisman Quintet piece, is central to the collection. The able combination of Waldrep (mandolin), Rogers (fiddle), John Cowan (bass) and John Jorgensen (guitar) expand upon and interpret "EMD" in their own manner while maintaining the vitality of the original Grisman composition. Also impressive is "Nine Pound Hammer;" Patrick Simmons' (Doobie Brothers) flat-picking prowess is on full display here with Cowan adding stellar harmony.

Besides Waldrep, who handles most of the lead guitar and some mandolin, Rogers is the second star of this project. Her flavorful fiddling provides tasteful accompaniment on a half-dozen tracks including on Warren Hayes' "Wayfaring Stranger," on which she triples up on fiddle, viola and octave violin. Andrea Zonn's fiddling impresses elsewhere.

Not the bluegrass compilation some may have been hoping for, the only arrangement that is full-fledged bluegrass is Gill's take of "I'll Stay Around" on which Scott Vestal's 5-string admirably cuts through. However, as were Rice's recordings, this tribute will be much appreciated by those who appreciate bluegrass-adjacent recordings.