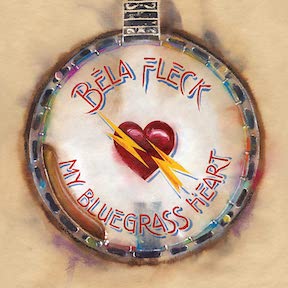 Forty-three years later, and in a year that marked the loss of two founding legends of bluegrass banjo, J.D. Crowe and Sonny Osborne, it seems appropriate that an equally influential innovator should make his return to the music that gave him his start. The impetus for "My Bluegrass Heart" was the death of yet another bluegrass trendsetter, guitarist Tony Rice, who had frequently played and appeared with Fleck.

"My Bluegrass Heart" is a collection of continually progressive bluegrass that sounds much closer to home than the majority of Fleck's recorded output. It is a welcome homecoming to the music many of us most appreciate; given Fleck's induction, as a member of New Grass Revival, into the International Bluegrass Music Association's Hall of Fame a year-and-a-bit ago, it is also appropriately timely.

Dissecting an album of this intensity is a challenge. Suffice to say each number sounds different from those surrounding it, and the album provides a unified if challenging listen. There isn't anything with which to sing along, and these songs — for the most part — are certainly not traditional sounding. As Fleck states, "This is not a straight bluegrass album, but it's written for a bluegrass band."

Fleck further expands, "I like taking that instrumentation, and seeing what I can do with it — how I can stretch it, what I can take from what I've learned from other kinds of music, and what can apply for this combination of musicians, the very particularly 'bluegrass' idea of how music works, and what can be accomplished that might be unexpected, but still has deep connections to the origins."

In summary, a return to bluegrass without being confined by what has come before and further stretching the sound of the music.

Notable tunes include the electrifying "Slippery Eel," highlighting Thile and Strings, the gently challenging "Hug Point" with Hull and Tuttle, and the twin fiddle showcase "Baptist Pumpkin Farm," featuring Cleveland and Duncan. Featuring Grisman, Duncan, Schatz, Douglas and Strings, "This Old Road" may be the collection's singularly most impressive piece. Atmospheric and stimulating, it is a five-minute tutorial in how to make the most progressive of bluegrass stylings relevant and meaningful for all listeners.

Mid-set there is a three-tune interlude including "Us Chickens," "Sour Grapes" and "Hunky Dory" that is suitably mesmerizing. Utilizing an extensive complement of his instrumental companions, Fleck has created a suite of songs absolutely gorgeous and riveting. And then Strings reappears with "Treacle Dragon (Revenge of the)," and we are again taken on a six-string guitar journey the likes we haven't previously encountered.

Highlight upon highlight, musical peak followed by an even more impressive musical summit, "My Bluegrass Heart" unfolds in this manner for some hundred and six minutes, each of them captivating. These bluegrass sessions have an innovative drive that has allowed Béla Fleck to return to the collaborative music of his heart. And that is a good thing.