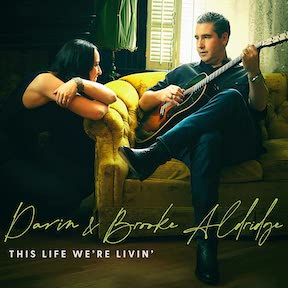 The North Carolina-based Aldridges infuse their performances with enthusiasm, devotion and camaraderie. Following several high charting songs, numerous award nominations, and outstanding albums — they are, without doubt — one of bluegrass music's most consistent outfits.

The Aldridges have moved to the Billy Blue label for "This Life We're Livin'," their ninth release. And for the most part, it is a terrific bluegrass recording.

Impressively, five original numbers are included, and they are among the stronger numbers. Writing with Bill Whyte, "Grand Ole Circle" is especially striking; while the feeling of this song has been captured elsewhere, the Aldridges' personal experience is built into the song providing additional resonance. Touching the heartstrings and reminiscent of "Mama's Opry" of many years ago, is "Livin' Mama's Dream," co-written with Dawn Kenney and David Morris.

A Guy Clark/Jon Randall Stewart song is included; "Die Tryin'" appeared on "Cold Dog Soup" a couple of decades ago, and its always pleasing to hear a Clark deep-cut get a bit of attention. The Aldridges' interpretation of the song — with Darin taking the lead and Brooke harmonizing on the chorus — is earnest and true. As assured is "Million Miles of Highway (When It's Over)" and kudos to whomever suggested this Alan Thornhill song.

The lead single "Blue Baby Now," long ago previously recorded by The Whites, is a lively start to the recording, while introspective songs like "Once In A While" and "No Mistakes" and the inspiring "He's Getting Me Ready" (featuring the Oak Ridge Boys) provide suitable variety. One of the more robust songs is the original (with Dennis Duff) "My Life's Living Me;" again, this type of song has been previously recorded, but the vocal performance given here by Brooke Aldridge is especially strong.

The duo stumbles with song selection only with "Old Fashioned," a dime-a-dozen song that provides rose-coloured reflections on a time when things were so much better...if you were of a certain type. Country and bluegrass music are filled with these types of songs (most recently from bluegrass band The Farmhands' "Back in My Day,") and would be strengthened if writers delved into the reality of those not as privileged.

That weakness aside, "This Life We're Livin'" continues Darin and Brooke Aldridge's streak of engaging bluegrass.