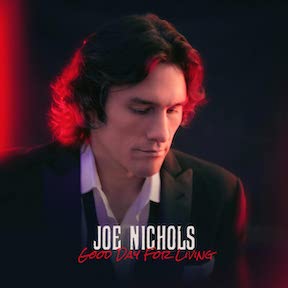 Yes, it's more than a little ironic that the guy who had a big hit with "Tequila Makes Her Clothes Fall Off," opens an album with a song called "Brokenhearted," which complains about how country radio so rarely plays sad, brokenhearted songs. Then again, there's a time to weep and a time to rejoice. And Joe Nichols does a little of both on his "Good Day for Living" album.

To prove this point, Nichols follows his tearjerker opener with "I Got Friends That Do," a duet with kidder supreme, Blake Shelton. Later, on the upbeat (sonically), but downbeat (emotionally), Nichols gives us "Reckon," featuring nice wordplay with the similarly pronounced words - yet each has entirely different meanings - 'reckon' and wreckin'.

As is so common in country music (yet a rarity in most all other popular genres), Nichols sings two faith-infused songs. One called "That's How I Grew Up" recalls how Nichols grew up singing "Amazing Grace" in church. Then on "Why Can't She," he wonders how, while God can forgive him, a certain girl can't.

There are few singers better than Nichols at singing straight-up country songs. Not coincidentally, Nichols name-drops George Strait during the nicely swaying, country-to-the-bone "One Two Step Closer." With its steel guitar and acoustic piano, it's a surefire slow dance winner. Then on "Hawaii On Me," Nichols' naturally wonderful singing voice shines on the appropriately sparse arrangement.

With this strong album, Nichols takes us to Brokenheartsville again and again, and there's no better tour guide for traveling this honky tonk trail of tears.