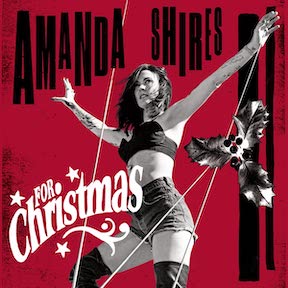 The first thing you may notice about Amanda Shires' "For Christmas" album, is just how much piano is on it. Shires is known for her fiddle playing skills, but this album is not the right forum for a lot of fiddle work. However, Shires' enjoyable vocal vibrato is present throughout this 11-track release. All are originals, except for "What Are You Doing New Year's Eve" and "Silent Night." Most of these are story songs, which just happen to take place during the holiday season. Shires proves herself to be a strong songwriter, with an equally strong singing voice.

By the way, if you're expecting something familiar and comforting with Shire's performance of "Silent Night," you're out of luck, bub. She changes the lyrics from something positive, to words much more dark and dire. The dramatic piano arrangement transforms this lullaby into a Kurt Weill theater piece. This is followed by the saloon piano driven "Gone For Christmas," which is a yuletide break up song. It's a rollicking roadhouse arrangement, and not overly sad. "Let's Get Away" has a long piano intro, before settling into a warm piano ballad. It's chorus states, "Let's Get Away From Christmas This Year."

Shires' album won't give anyone the warm Christmas fuzzies. It's not so much an anti-Christmas album, as it is an alternative look at the season. So, if you're in the mood for something a little...no...a lot different, this might be the right gift on your wish list.