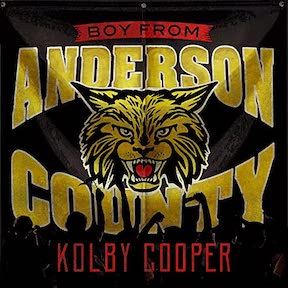 The "Boy" in the title is no joke – Kolby Cooper has a babyface that wouldn't look out of place in a maternity ward, even if his frame is the size of a Sasquatch. At an age when most folks are figuring out their first job, this East Texan has already married with two kids, and accumulated over 100 million streams of his power chord country. Cooper is catching that current of Chris Stapleton and Luke Combs-styled country. These guys can more than capably write and sing the dickens out of a heartfelt track.

Lyrically and sonically, there's no better mission statement than the opening title track. What starts out with simple finger-picking turns into a blast furnace of gratitude to his high school sweetheart. A love song isn't where many artists would begin. But it also serves as the aw-shucks and real-life backstory of a shy kid who waited nearly 10 years to kiss his best friend-now wife. Things get more raucous, naturally, with "Good For You," a fairly straightforward but polite kiss-off "Excuses," another heads-up to an ex that you can't kid-a-kidder. The guitar work here is thickly layered, but this is still within the borders of pop-country rock. The melodies won't sound inventive to the experienced. But the sentiment is there,and will inevitably connect with broken hearts in the heartland. The modern tendency to drop in some cussing is also there. But it's nothing they can't say on primetime TV.

Cooper has a hand in writing all six tracks, and the set comes across as a unified, personal work. He certainly gets some mileage out of heartache. This couplet from "Way To Go" is particularly sharp: "Even got your mama texting what the hell were you thinkin' / Funny how an empty dresser drawer can really make it sink in." When Cooper counsels that using the bottle for depression medicine is off-label, you'll believe him. But it's nice to know that the Texas boy ended up a happy man, and there's a bright new talent on the country scene.