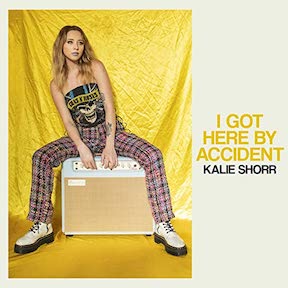 When somebody says they come from the Portland music community, odds are you picture the hippie haven in Oregon over the lobster roll lovers in Maine. But Kalie Shorr's atypical in a lot of ways. It's not a standard story to be a young lady from a Nirvana cover band who occasionally sings on the Opry stage. But, hey, like her biographical title song goes, she got here by accident.

The main thing to know is that this is a straightahead taster's menu of a rock record (five-track EP). Despite the positive reviews of prior work like "Fight Like A Girl" -- which could have been sung by lots of people -- this feels much more personal and specific to the artist. Even the sweet songs dedicated to friends and lovers have sharp guitar teeth. But it's approachable. This is no wall of sound attack so much as a poppy homage to power-chord '90s darlings like Avril Lavigne or Good Charlotte.

Shorr's songwriting distinguishes itself through comedy intertwined with other sentiments. On the don't-miss-it knockout track "Amy," we have an ornery dressing down of an ex-friend who took an ex-boyfriend. But it drips with hilarious lyrical sarcasm ("Do you want the other half of my sandwich?"). When Shorr pledges her unbreakable bond to a best friend ("Alibi"), there's really no limit to the lengths she'll go ("if you dig a hole, then I'll bury the body"). It's a bit of a magic trick, but the wry angle these songs come from makes for a more emotionally intense experience versus a straight-ahead pop song. Producer extraordinaire Butch Walker (Pink, Taylor Swift) really dug into this project by playing every instrument and keeping distractive elements out – no banjos or synth solos here.

Just try to keep a straight face when you hear Shorr report to another ex that she heard he got a girl...pregnant. The pregnant pause has never been used so on the nose. Shorr may emphasize serendipity as a guiding force in her life. But for this terrific batch of songs, it sure sounds like a creator who knows just what she's doing – highly recommended.