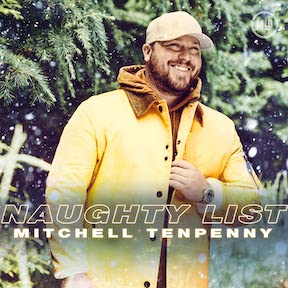 One big clue that Mitchell Tenpenny's "Naughty List" holiday collection is a winner, is how spontaneous and rocking is his version of "Jingle Bell Rock." He doesn't just repeat the Bobby Helms original, but instead makes it all his own. Then again, with a distinctive voice like his, he puts his personal stamp on everything.

He rocks out even more during "Santa Claus Is Comin' to Town," even though that one also includes upfront banjo picking. His 11-song effort is mostly comprised of such familiar holiday songs, with a few originals thrown into the mix. One of these originals is "I Hope It Snows," is a sweet ballad duet with Meghan Patrick. Although Tenpenny lets it rip in a few places, he's wise to do "O Holy Night" gently, with mostly just acoustic guitar backing.

Tenpenny has a voice perfectly suited for R&B. He just naturally sings sexy. However, he's chosen country as his genre. Granted, at times he sounds more like a soul guy doing country. With that said, though, his uniqueness – at least among the country crowd – makes his singing stand out. Play this one for friends and family that say they hate country and see what they say. Traditionalists may just need to admit they like it, as well. Either way, playing this one at holiday parties won't leave anyone thinking you're The Grinch.